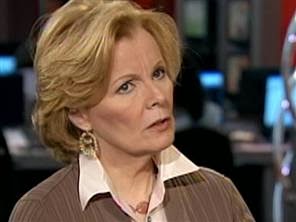 I digress for a brief moment.

Peggy Noonan is a Wall Street Journal writer who has in the past worked for CBS News with Dan Rather as her boss. She also has been a fixture on ABC and NBC as well. Presently, she is a Fox News Contributor.

She is very well known for being a Reagan speech writer back in the day and actually wrote the Challenger explosion speech President Reagan gave to the nation to address the tragedy. In that speech it was her writing skills that caused Reagan to draw upon the poet John Magee's famous words about aviators who "slipped the surly bonds of earth... and touched the face of God."

During the 2008 presidential campaign, Noonan wrote about Sarah Palin's vice presidential candidacy in the Wall Street Journal. In one opinion piece, Noonan was not too complimentary and expressed her view that Palin did not demonstrate "the tools, the equipment, the knowledge or the philosophical grounding one hopes for, and expects, in a holder of high office," concluding that Palin's candidacy marked a "vulgarization in American Politics" that is "no good... for conservatism... [or] the country."


That straight forward Peggy Noonan recently wrote a blog post in which she described the White House staff of our current President as a bit air-headed to say the least. Her words were a unique summation of the condition, from her perspective, of the people who make up the president’s administration that is leading our nation.

I’m not interested in agreeing or disagreeing with Noonan on her view of the White House Staff or even her view on the present President, whatever that might be.

I do, however, wonder if in her summation about the young people from the Whitehouse she has not connected with a degree of reality about the entire present generation. You can read and decide for yourself. Here is what she said on her blog, unedited.

From what I have seen the present Obama White House is full of young people who’ve seen the movie but not read the book. They act bright, they know the reference, they’re credentialed. But they’ve only seen the movie about, say, the Cuban missile crisis, and then they get into a foreign-policy question and they’re seeing movies in their heads.

They haven’t read the histories, the texts, which carry more information, more texture, data and subtlety, and different points of view. They’ve only seen the movie—the Cubans had the missiles and Jack said “Not another war” and Bobby said “Pearl Harbor in reverse” and dreadful old Curtis LeMay chomped his cigar and said “We can fry a million of ‘em by this afternoon, Mr. President.” Grrr, grrr, good guys beat bad guys.

It’s as if history isn’t real to them. They run around tweeting, all of them, even those in substantial positions. “Darfur government inadequate. Genocide unacceptable.” They share their feelings – that happens to be one of the things they seem to think is real, what they feel. “Unjust treatment of women—scourge that hurts my heart.” This is the dialogue to the movies going on in their heads.

There’s a sense that they’re all freelancing, not really part of anything coherent.

For four years now, I’ve been told, by those who’ve worked in the administration and those who’ve visited it as volunteers or contractors, that the Obama White House isn’t organized. It’s just full of chatter. Meetings don’t begin on time, there’s no agenda, the list of those invited seems to expand and contract at somebody’s whim.

There is a tendency to speak of how a problem will look and how its appearance should be handled, as opposed to what the problem is and should be done about it. People speak airily, without point. They scroll down, see a call that has to be returned, pop out and then in again. It does not sound like a professional operation.

This is typical of White Houses, to be sure, and yet, on some level, extreme.

The lack of focus, the lack of point, the sense that they think that they are operating within accepted levels of incoherence—this all sounds, actually, peculiar.

I agree with her, Paul. We have a generation coming up who was reared on sound bites rather than the whole story.
I read something interesting yesterday. It was in a municipality management magazine. There was an interview with a public works director from a medium sized Oklahoma city. When asked of the number one major problem facing utility managers in the state, his answer was "The retirement of the baby boomer generation" When asked to clarify the statement, he went on to say that the younger generation refuses to do "whatever it takes to get the job done" because they are not dedicated to the work at hand and have a short attention span. He said "they want to move too fast with little attention to detail and no 'stick-to-it' ethic". He predicted future power distribution problems because of the attitude described in your blog.
Interesting thoughts!

You got that right. It's interesting and a little bit scary.I'm just glad we've read the proverbial last page of the book.

How very apt for the situation we find Down Under.

Just listened to Question time in Federal Parliament.Everything Peggy Noonan said is relevant in our situation.

Someone once said, "Common sense ain't so common anymore". How right they are!

My wife made that very statement to me the other day. "Common sense isn't so common anymore.."

Peggy Noonan has hit the mark on her blog. What causes me concern is the lack of "discernment" not only within the public sector but within the church. Of course discernment is not going to be of value if there is no foundation of truth to begin with, thus the importance of history, trials in life, learning from experience, mentoring and character traits passed on from parents. Some of this generation's problem is due to parents who quit parenting if you will.

What we are witnessing is indeed a worldview of sound bytes, lack of professionalism and integrity and no regard for consequences of your actions. In the military people can die from this worldview, in the real workforce they get fired, and in politics no one is held accountable because it is not their fault.

I believe Charles Spurgeon said, "If there is no fear of God, there is no love for truth."

With this..."What we are witnessing is indeed a worldview of sound bytes, lack of professionalism and integrity and no regard for consequences of your actions. In the military people can die from this worldview, in the real workforce they get fired, and in politics no one is held accountable because it is not their fault."...you've about said it all. Thanks.