Because tomorrow is the 4th of July and means a celebration of our Nation's birthday, today will see much made in local gatherings [churches] about God AND Country. But as one I read said, "We must be sure that while we are able to love BOTH, only the FORMER [God] is to be worshipped." That is a sentiment with which I could not agree more. 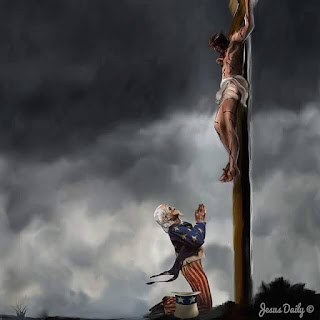 That said, I've found that a mistake is often made when people talk about the Declaration of Independence of the United States of America. That historic document DOES declare that all Americans have certain UNALIENABLE rights among which are listed life, liberty, and the pursuit of happiness. Unfortunately, the word often used when people quote it is the word INALIENABLE, which is incorrect, but seldom realized as so.

Before someone says they mean the same thing and so the using of one or the other is insignificant, I would like to point out that the difference that may seem ever so slight is actually essential for an understanding of what the Framers of that Declaration intended for our nation.

This point was clearly stated in a court ruling in 1892 entitled Budd vs People of the State of New York. That ruling said, "Men are endowed by their Creator with certain "unalienable" rights, 'life, liberty, and the pursuit of happiness;' and it is to 'secure,' not grant or create these rights, for which governments are instituted."

The list in the Declaration of Independence can be expanded since it says "among which are" and then lists life, liberty and the pursuit of happiness. We could add such things as self-government, self defense, nature's necessities of air, food, water, clothing and shelter as well as worship. Such rights are absolutely incapable of being transferred lawfully, unlawfully, privately or by implication or operation of law.

That which is your "unalienable" right is a part of you in an absolute sense and could no more be removed from you than could your blood be removed and you live without it.

INALIENABLE [notice the change only in the beginning letter] rights, on the other hand, CAN be surrendered, sold, or transferred with the consent of the individual because they are NOT inherent [unalienable] and the government CAN alienate these from an individual, if a person consents, either actually or constructively, since the government may be seen as the source of these individual rights.

Most State Constitutions refer to only inalienable rights. But it is our UNALIENABLE RIGHTS to which our Declaration of Independence addresses itself and recognizes them as given to us by our Creator.

It could be that the loss of recognition of our Creator is what is leading to the mistaken general use of these two words in our modern day language. There may also be other factors involved. But the point of this post is simply that people do have both, but they are not the same at all. So, clearly, the words are not to be used as synonyms though often is done so among otherwise intelligent people.

This 4th of July, 2016, we are celebrating our Nation and her Declaration of Independence which declares and her Constitution which preserves those UNALIENABLE rights! And I say, HAPPY BIRTHDAY America! We love you!

But on this Lord's Day, July 3rd, 2016, we are celebrating our Living Lord Jesus, as we do EVERY DAY of our lives as Kingdom Kids, and I say, HAPPY RESURRECTION DAY Lord Jesus, on this day and every other day of our lives! We LOVE YOU AND WORSHIP YOU!!