I'm convinced that BOTH reflecting on the old and resolutions for the new CAN be dangerous to our emotional and spiritual health if we're not careful.

I have also personally found that when both are looked at honestly [the past year and the prospective year] we will find a little of the good, the bad, and the ugly mentioned in the title of Eastwood's movie and without that genuine honesty there will be no possibility of a "happy New Year." [Or a living with the old one in peace for that matter.]

I'm aware that only one out of the ten readers of this post may understand or need what I will ultimately say here, [that may be overly optimistic about total readership :)] but it is for that one I will write.

The next segment will come in a couple of days. Then the next.....until I've said it all. I tried to put it in one post and quickly realized I would lose everyone including me in the length of it. So in parts it will come. But it will come.

A POEM FOR THE SEASON

Mary's friend and highschool classmate and my good friend T. D. Webb has written an exceptional poem that was posted on another blog. I've chosen to post it here. Read it and you will understand why. As I said Tommy, exceptional. Way to go.


It’s Christmas time in this mired land,
Bone chilling cold the season,
The Son of God became a man
Beyond all human reason.

It’s in the record of His Book,
In pages old and worn,
Announcing news for those who look,
A baby Savior born.

How could you, Lord, demean Yourself,
To this rebellious earth,
Put judgement power upon the shelf,
In ignominious birth.

Yet, You saved us lovingly
Beyond the scope of time,
With grace incomprehensive be
To a merely mortal mind.

From eternal to eternity,
You planned this to instill,
From predetermined destiny,
Accomplished perfect will.

So to this day the minds of men,
Are lead in grand deception,
Allowing many to descend
To utter desolation.

But for the remnant God did choose,
To save from dread despair,
He from the start deemed not to lose
Them to the Prince of Air.

It’s Christmas time in this mired land,
He came to save His own,
Great Sacrifice, He lives to stand,
Our sin He did atone.

In His Grace and Peace.

CIVIL DISOBEDIENCE THAT IS REALLY CIVIL

I've recently read that there is a protest being orchestrated against Rick Warren, Pastor of Saddleback Church in California who has been invited to pray the benediction at the inauguration of President-elect Obama. The protest strategy is that the participants are to "boo" from the beginning of Pastor Rick's prayer to the end. Have you ever wanted to protest something that way? I have. Maybe even long and meaningless prayers. Just kidding.

I've often wondered if during the sixties and seventies, which are often referred to as the decades of protest, I was not too blase' with regards to the gender and racial inequalities that were so prevelant in America along with some other issues worth protesting. I'm not speaking of using the pulpit in dealing with social issues, but as a citizen I have some personal responsibility in such matters. I know there is a fine line to be walked in being a preacher of the gospel and becoming nothing more than a social voice in the pulpit rather than the gospel voice announcing the need for a new birth, the One who provides that birth and the coming of a new Kingdom. I NEVER want to loose that voice in order to correct ANY social wrong.

That said, some wrongs are worth protesting. Without a doubt it requires courage to stand for the truth of the gospel and share it as christians. It requires that same kind of courage as a citizen to affirm standards that exist that are worth preserving as a society and to propose and defend any laws that make possible the order and justice and freedom of all our citizens. It could even take the form of "civil disobedience," I think with an emphasis on civil.

The protest decades that I mentioned earlier sometimes took an angry and even illegal tone to them. [Much as the booing protest which, it seems to me, is more out of anger than anything else.] It was an illegal and deadly protest that the man associated with President-Elect Barack Obama was involved in that created a pause inside me during the campaign me as to the qualifications of our new President to-be. But I digress.

However, to throw out protest altogether because some do it with anger or illegally would do great damage to our nation in my judgment. There does exist a form of protest worthy of praise; and it is that protest to which I'm drawing attention. To protest civilly against whatever would bring about the destruction of the moral order and the social order is an act of courage and piety I believe. That sort of protest against the enemies of order and justice and freedom will be heard far better than will violence or anger in the name of protest.

Those who see our protest when it's that kind may not agree with what we say but will more likely give our issue position a hearing. So I'm going to share some remarks I read concerning rightful protest in this age of ours when often it seems as if the bottom has dropped out of what we hold dear. The following is adapted from a source I found that was delivered long ago [30 years] but still meaningful to me.

CIVIL PROTEST THAT IS MORE LIKELY TO BE HEARD.

"If we protest, it ought to be a protest arising out of love, and not out of hatred;

that protest ought to be an affirmation that the fear of God is the beginning of wisdom.

That protest ought to be an affirmation of the dignity of man, not an appeal to primitive impulse.

That protest ought to be an affirmation of the ties of family and community, not an enthusiasm for centralized power or for the overthrow of private and public affections.

That protest ought to be an affirmation of the goodness of God's creation, not a denunciation of the life-impulse.

That protest ought to be temperate and patient, not an inciting to violence.

That protest ought to be undertaken in humility, not in the self-righteousness of the Pharisee.

That protest ought to reunite the generations and the classes, rather than becoming a declaration of war with sword in hand.

That protest ought to ask for the recognition of moral authority, and not for the casting of every person upon his private petty resources of intellect and appetite.

And that protest ought to be promulgated in the name of the permanent things, rather than being a shriek amidst the winds of doctrine.

Protest which ignores these aims and limits is no better than the howl of the fanatic. That howl echoes through the world today; it has been raised recently upon some campuses, in crazy protest against the President's visit to a German graveyard, in frantic demand that South Africa be reduced to the happy condition of Uganda or Chad. Before the stony idols of Unreason and Devastation, the modern mob bows down. Unreason often seems fashionably clever, and Devastation has its charms for the bored and the hopeless. But it requires courage to speak up for the truth with character in this time of troubles which is our age."

I believe there is wisdom in these words for christians also who disagree and debate one another theologically. Or those who protest the actions of leaders or governing bodies in a denomination. This is one of the reasons I have supported and admired the actions of Wade Burleson the past three years. NOT because he is my son. But because he is a civil protestor as a christian in Southern Baptist life. May his tribe increase.

I thought I would write a Christmas greeting and some thoughts for the season. Then I read what my friend, Rick Anthony, pastor of Grace Fellowship Church in Norman Oklahoma had written to his fellowship and decided it needed to be heard by anyone passing by my blog. Great thoughts Rick...thanks.

After the most recent election I made the personal commitment to pray for our new president. I committed to pray for this man even if I find myself in disagreement with his decisions or direction. I also have committed to pray for those who serve as leaders with him. This has really created an interesting challenge as he has begun announcing his choices for his cabinet. There are some chosen by him that I didn’t expect and some that I feel are wrong for the job. There are some that I think are perfectly suited while others have been chosen who were not even in my top twenty-five. Basically, I am finding that it is somewhat tougher to pray for something or someone when it not my choice or the decision that I would make. It is tough to maintain my prayer support when I am having to pray outside of my box, my box that defines how I have decided this should happen.

The people in Isaiah’s day had this same problem thinking outside of the box. Read Isaiah 9:6-7. Who is the ultimate person this passage is talking about?

It is ultimately speaking of Christ and it clearly explains that He will be coming as a child, yet when that happened almost no one expected that the Savior was a little baby. The result of this inability to think outside the box resulted in most of the people missing the opportunity to sit at the feet of Christ.

What areas of life do you miss out on due to the fact that you have allowed yourself to be boxed in?

TOO GOOD TO PASS UP SHOWING 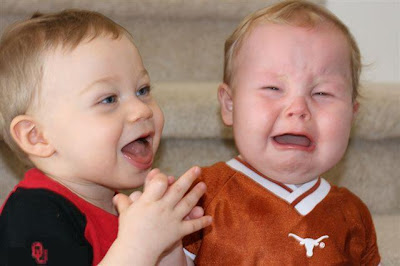