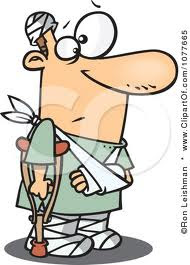 I've just returned from an eight day ministry trip to Texas with two meetings back to back at two fine churches. I appreciate the comments that continued and the readership. Blogging is fun and a real part of my life and even my ministry in a manner of speaking I think.

That said however, it will be important for me to take a break for a short while. I'll be having surgery [left shoulder rotator cuff] this next Thursday and the recovery will be a bit more extensive than normal because the tear is complete and the tendon is loose from the bone.  So I'm planning to take the time between now and the first of the year to recover.

I may periodically post if something happens that I feel compelled to write about, but that would only be a couple of times at most I'm sure.

Really, I'm just attempting to let those half a dozen or so who read my blog know what is going on with me.   LOL

Seriously, I do enjoy this and will be doing it again soon. Thanks for being a part of what is happening.

In the history of the Church the message of the gospel has often been won or lost at various times with the battle being centered on two extremes, either one of which is heretical and will deprive the gospel of its content and its power as a message of redemption. So both heresies are equally dangerous and damning. I want to address those two heresies.


The first of those extremes is when our message becomes simply one of moralism. That is conforming to certain principles of behavior as right or wrong and having our spirituality measured by those standards. Paul the Apostle spent much of his time in the New Testament tearing down the message of principled behavior being the measure of our lives when he repeatedly told the Jews that even The Law Of Moses wasn't the standard by which they were to be redeemed OR measured after salvation. That Law was the school master to drive them to the way of redemption, which was a Person. Paul's brilliant declaration of this fact is recorded in his letter to the Galatians, particularly chapters 3-5.

Interestingly enough, this same heresy seems to capture the minds of some who have professed faith in Christ. [Paul found the same problem with those early believers to whom he wrote.] They somehow seem convinced that it is now their job to attain their sanctification by that same moralistic principled way of measuring life. ["If I, when I, because I, THEN, He will.."]

Paul challenged the Galatians to remember that their sanctification was found in the same person from whom they received their salvation and that they were to walk in sanctification in the same faith by which they were redeemed. Remembering this would deliver them from thinking that their life was to be somehow measured by post-salvation law-keeping and remind them that it was, in fact, to be evidenced by a genuine law of love. [Galatians 5:1-14]

Moralism, either before or after salvation, is dangerous and damning for real Christianity. It is heretical.

A second heresy that is just as dangerous and damning is what is popularly called, in theological terms, antinomianism. [No Law or lawless] This is the idea that there are no claims for obedience once you are a Christian and because of grace there is no standard for behavior at all. Some would admit to the fact that the gospel does make demands upon sinners as seen in 2 Thessalonians 1:6-9, Romans 1:5; 16:26 and other places where it calls upon them trust His atoning work and under His Lordship, become His disciples. But they then attempt to diminish having any standard of behavior as not possible post-salvation for grace to be real. They mistake grace as a license to do whatever they please with no consequenses

This may be because they know our present society isn't interested in anyone telling them what to do, so, in their way of thinking, subtle though it be, we must adapt our message of the gospel to rule out any standard demanded of those that believe. An easy-believism is the result because the voice heard delivering the message now does so with no authority to it and no power in it. [This because the gospel is lost.] This is both dangerous and damning in its consequences.

The problem lies in knowing which commands are really for believers and why we obey them AND why the commands of the Law of Moses and obedience to them post-salvation are not those commands.  It's a big problem but one that needs to be faced and understood.There is a genuine standard and law for believers and it found, as always, in the Person of Christ. He IS our Sanctification and He IS our Law-giver.

I'm going to use one verse to illustrate the difference in both the standard, which is new, and the motive, which is new also, for keeping the New Covenant standard for believers. The principle found in this illustration will hold for all commands in that New covenant relationship we have with the Person of Christ, who is our Lord.

How is it that He calls this a "new" commandment when it was clearly stated in Leviticus 19:8, by Moses, that Israel was to love their neighbors as themselves? Jesus even repeated this Old Covenant commandment of Moses when questioned about the greatest of the commandments in Matthew 22:40. "To love the Lord your God with all your heart, your soul, and your mind and your neighbor as yourself. On this hangs all the law and the prophets." It is quite obvious that loving your neighbor is an old commandment.

But what we have here, when understood, is quite revealing. It is this..

The commandment of Moses is__"Love your neighbor as yourself."

The commandment of Christ is__"Love one another as I have loved you."

So a new twist, even a bit of an unusual novelty [having no precedent] is found here by Jesus introducing Himself as the standard for love. The old criterion had been "as you love yourself." But the New Commandment from the New Lawgiver uses the love of Christ Himself," as I have loved you," as the new model.

We wind up with..

It really is true that, as the American Standard says, "Wherefore if any man is in Christ, he is a new creature: the old things are passed away; behold, they are become new." [11 Corinthians 5:17]

So, when that Spirit enters us, His first work is.."The love of God hath been shed abroad in our hearts by the Holy Ghost which was given unto us." [Romans 5:5]  What He gives us is not only the understanding of how greatly God loves us and the faith to receive it, but something almost as wonderful. He gives us the Love of God, as a genuine spiritual existence, as a Living Power, in our hearts. It cannot be otherwise, for as Andrew Murray says...

"The outpouring of the Spirit is the in-pouring of Love. This Love now possesses our heart: that one same Love with which God loves Jesus, and ourselves, and all His children, and which overflows to all the world, is within us, and is, if we know Him, and trust Him, and give up to Him, the power for us to live love too."

Our law is the law of love. And love will refrain from committing adultery with another man's wife, stealing his property, lying, and all the other things that damage relationships. When we do violate that standard of behavior, and we do, we will be broken and in confession admit it because of our love for Him. But it is His love that is our law.

Both moralism and antinomianism are heresies and are both dangerous to the gospel. Never forget that salvation by grace is not a salvation without demands. But that salvation and the consequential demands upon a disciple are fulfilled in a person who, as we discover how much He loves us, [or forgives, etc.]  we also are commanded to, desire to, and are empowered to love others. [And forgive, etc.]  And it is totally by grace through faith apart from any merit of any kind.

All the law and the prophets are fulfilled in the Person of Christ.

It is truly amazing Grace.

Six years ago I started blogging. Nearly 500 posts later, with comments from 10 nations, I continue doing it. Someone may ask why a blog?

My answer back then, and still is, so I can address issues both theological and ministerial in a conversational way. I will, of course, be giving my view on the issues and will do so with the knowledge that my grasp of truth is finite and growing. I trust the Spirit to give understanding, as all Christians do, and am confident He does and will.

My confidence in my ability to hear Him and to grasp the Truth, however, is not as strong. I've lived with the power of flesh and self too long to have much confidence there. But I will attempt to be open, honest, and careful in what I post so at least you will know where I stand.


I do, however, believe strongly that our ground of unity as believers is not found in agreement on issues or even in agreement on the nuances of "minor doctrine". I'm using the word "minor" here not meaning "unimportant" but unrelated to the essentials of salvation/eternity which are the majors in my way of thinking .

The basis of our unity one with another as Christians, which by the way we are never told to create but to maintain, is that the Spirit HAS ALREADY CREATED OUR UNITY, and that is on the basis of Christ alone and His work on the Cross, as Paul said to the Corinthians in the first three chapters of the First Corinthian letter.

If someone says Christ was human only and not the divine Son of God who died on the Cross for us, that person is not my brother. I will love them and share my life with them, but they are in need of the gospel. My brothers/sisters are those who name Jesus as Lord. And although we may be as different as daylight and dark in our understanding of some minor doctrines, our association with various denominations, our having differing views on some issues and our embracing of a multitude of various methods in mission and evangelism, we are still in unity as brothers and sisters in Christ.

So we are brothers/sisters because of who Christ is to us and our acceptance of what He accomplished on the Cross and the empty tomb. This obviously presupposes a confidence in the integrity of the Scriptures as they are the divinely inspired record of who He is and what He has accomplished.

This blog will address those issues, differences, and nuances, but as a brother in Christ. I will be doing what many others have been doing and some quite successfully. I only hope I can help lead the way in being gracious and kind to those who differ on issues and other things written about. For this to happen my goal will NOT be one of being right, but being honest and at the same time respectful, in other words, Christian. Then, perhaps, this little personal word on this particular blog, will be a help to many and an enjoyment to some.