We have looked at two principles for interpreting scripture that are to be remembered as we study the Bible. The first was grammatical integrity and the second was historical integrity. Remember, I'm using the word 'integrity' with it's definition of "soundness or completeness." To have a sound and complete understanding of what is being said and meant by any passage of scripture one needs to use certain guiding principles. We will now look at the remaining two briefly.

The third principle that a person needs to work with when interpreting a passage of scripture is what I would call contextual integrity. This one is extremely important. I've not tried to rank these principles and it may not be necessary to do so since all are very important, but this one may well top any attempt to create a list. So let's think about the context principle. 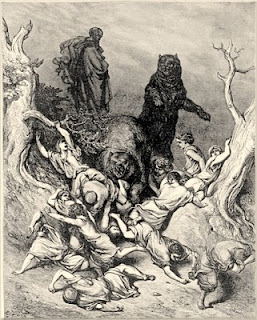 Have you ever seen a person take a verse of scripture to back up any kind of conceivable point they are trying to make? I think you can prove ANY point you wish to by quoting a verse of scripture. I read one person who read 2 Kings 2:23-25 and asked..."A PROPHET OF GOD SENDS 2 FEMALE BEARS TO KILL 42 CHILDREN FOR CALLING HIM “BALD HEAD. HOW CAN YOU BELIEVE IN A LOVING GOD WHEN HE ALLOWS BEARS TO DESTROY CHILDREN?" [All caps was indicating the questioner was shouting I suppose.]

Admittedly, this passage needs some understanding. Using our first principle we discover that the word translated 'children' is a Hebrew word meaning "strong young men." It was a word used to describe young soldiers which would rule out the English word "children" entirely. It is referring to young men who were probably followers of the false prophets who were angry at Elijah's ascension. [Isaac was called "Little Naarim" when he was 28 years old.]

But the second principle dealing with history and even the third which we will address today, contextual integrity, would show much more about this strange passage, were all considered in interpretation rather than simply trying to prove a point that God is not  a loving God to allow something like is described here..

In fact, the entire incident is actually meaningless and grotesque without using the first three principles. But who's going to research grammar, history or context when you've got a point to prove? No one except for those who legitimately wish to discover what the bible is REALLY saying and means.

Suffice it to say that God's judgment fell upon a mob of young men, possibly from a school for Baal prophets nearby, who were mocking the translation of Elijah [Go up] and heaping scorn upon God's prophet Elisha. [Saying "Thou bald head" was much like throwing a shoe is today in the middle eastern culture.] Whatever else can be said by way of interpretation of language, history and context, you see the quick assumption made by the comment above to prove a point is meaningless to truth.

Let me illustrate the need for context with another passage. In fact, it's my favorite illustration. It is in Matthew 18:20 where Jesus said, "Where two or three are gathered in My name, there am I in the midst of them." Now does He mean if there is just one person He's not there? He can't mean that because He indwells EVERY believer. Well, does He mean when you have just have a few show up for a Sunday night service He promises to be there just like He's there when a large crowd shows up? Is that what the verse is meaning? I don't think so. I think He's present regardless of whatever the specific number of people who might be gathering. Then what does it mean?

Well, in context, [There's that needed principle.] Jesus is dealing with a believer having to confront another believer who has gone into scandalous behavior. [Offend doesn't mean offend as in English but as in Greek.] It's speaking about when you may know, for a fact, of another brother or sister who is living scandalously and how you would then have a responsibility to go to that brother or sister. Notice you don't tell someone else about it, you go to the person. You don't report it to the Pastor, you go to the person.

If it isn't resolved THEN you take someone with you. If necessary, eventually even the entire Church may need to be involved. But always realize this passage is saying that the presence of Jesus is with you in those difficult moments in a very special way. That is the message of that passage when the context is considered.

Further, the passage says if the individual doesn't receive you even when confronted by the entire Church, you are to let them go. You accept their decision of saying,  "I don't want anything to do with you, I don't want anything to do with God, I'm going my chosen way." It will and should break your heart, but you are to let them go. In fact, you begin to love them as you love lost people needing the grace of God. [That's the way we are to view infidels or unbelievers. There is a withdrawing passage in 11 Corinthians 5, but that's a horse of a different color entirely.]

But to the two or three that ORIGINALLY gathered to try to correct and help the brother or sister, Jesus is saying that He is never more with us than when we are gathered in His name specifically to do an act of recovery or discipline. That's tough stuff. So tough that few churches or Christians are willing to do it in our day.  But when it IS done, He's there in a very special way. That really is a powerful thing to me.

Now it doesn't take away at all from the importance of His presence being with a small group as well as a large group. It is true that God IS  there. But that's not what this Matthew 18 passage is addressing at all. With a contextual understanding you have a whole different spin on that verse and what was intended when Jesus spoke those words. How do you get that?  You get it from the context.

The fourth and final principle is the discovering of the difference between a timeless truth and a regulation for a certain people at a certain time. Now the reason I'm going to need to stay around this point for a spell is as soon as I say that someone is going to disagree and say there is no such thing in the bible as a difference between timeless truths and specific regulation to specific people. All of the Bible is for All of us. I'm wasting their time as far as they are concerned.

My answer is....well, my answer is too long for this post. I'll do it more justice by dedicating the next one to it specifically.  There will obviously be a part three to all this. Until then, blessings.

I sure would have liked to understand "contextual integrity" in my young naive days!

The teachers I had, especially those who were regarded as "the intellectuals" were those you speak of who say," no such thing in the bible as a difference between timeless truths and specific regulation to specific people."

I still have a picture in my mind of a lecturer, with whom I had the temerity to disagree, telling me that the truth as he taught it was "THE TRUTH":)

I heard that same lecturer. He hasn't changed. ;)

Thank you for your posts .. I just found you about a month ago and I am learning a lot from your teachings.. Heather

You are welcome here and I'm glad you found us. Be sure and add anything you desire about any subject being addressed. Your insights, thoughts and comment are always welcome.