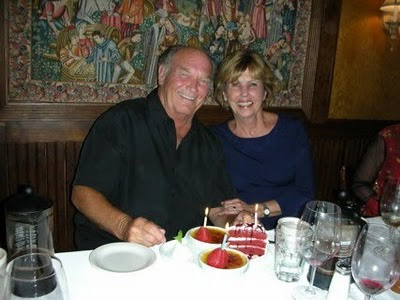 Tomorrow marks fifty-one years of marriage for Mary and me. We're celebrating by taking a pistol lesson together at the firing range. [seriously] We both have pistols but have never really learned to use them. This is NOT in case we get mad at each other in the coming year. [Joking]

When I think of fifty-one years of marriage It's apparent to me the key element in it has to be "God's Grace" because nothing else could explain Mary's ability to hang around someone like me. But it HAS become a gracious thing though not without it's continuing trials and learning experiences.

But were I to try to adequately say what I feel about Mary I would not be able to find the words and that's unusual for me since I'm something of a wordsmith.

C. S. Lewis, about a month after he lost wife to cancer, began writing a journal which became the basis for his book entitled, A Grief Observed. His eulogy for his wife, later put in the book, describes what I would call a truly grace-filled marriage. (p. 39) He wrote it upon the death of his wife but it speaks words I feel about Mary as we celebrate our fifty-first year and we're still together.

"For a good wife contains so many persons in herself. What was [his wife's name] not to me? She was my daughter and my mother, my pupil and my teacher, my subject and my sovereign; and always, holding all these in solution, my trusty comrade, friend, shipmate, fellow-soldier. My mistress; but at the same time all that any man friend (and I have good ones) has ever been to me. Even more. If we had never fallen in love we should have none the less been always together, and created scandal by being so."

You will notice the utter inability even C.S Lewis had in stating what his wife was to him since she was everything imaginable. I know the inability.

I will only add two things to conclude.

One is Mary and I have conquered the concept someone called the "stirring of the oatmeal" principle. That's just the idea that some people are able to find together the remarkable ability to transform little mundane events or moments into ones that are enjoyable, stimulating, memorable and just plain fun. What's more mundane than stirring oatmeal unless you discover something unique in it for the two of you? WE DO.

The other is Mary and I have learned to alter an old cliche, "familiarity breeds contempt," into one that says "familiarity breeds respect." So that in the sharing of thoughts, ideas, concerns, [familiarity] respect is learned. It is also learned in shared joys and sorrows and in the struggle to understand each other. Two people CAN, after all, live in the same house for decades without ever being present for each other REALLY. Without ever experiencing a joining or linking of thoughts and feelings, longings and fear, or sharing their failures honestly.

But to be close enough to experience all these things together will soon prove that true respect is NOT saccharine sentimentalism at all. It IS strong stuff. So strong that it is even learned and finds it's way into each person for the other through constructive conflict which is the growing edge of any relationship.

It is because of this respect that wounds can come and hurt for a while but..there will always be that long walk back..to genuine respect and safety.

It takes forever [how about at least fifty-one years!!] for this to become reality. Especially between two people as different as daylight and dark as are we. But we are two people who are learning to walk in true respect and love. I'm glad I'm doing it with you Babe.

Happy fifty-first beautiful. I love you. I'm glad we married because that scandal we would have created had we not married would have hampered our lives a bit I'll bet.
Posted by Paul Burleson at Thursday, May 27, 2010

Hey, Handsome,
I just read your post. Happy Anniversary to you too. I agree with all the reality stuff you said, but some of it made me want to say, "Huh? Who is this imaginary creature you think you are married to? I want to meet her." We have a great relationship and I'm so glad we've shared our lives for all these years. Hope we have many more. Love you, MB

Congradulations to you both! I made a comment to a dear lifelong friend of mine (who ironically is also named Paul) via email after we were musing on how we were amazed (and grateful) at our 40 year frienship...that I think is applicable to this occasion.

Both he and I married up (as it seems you have as well...if you know what I mean) and I happened to see him via video speaking at FBC Woodstock from last Sunday evening. I wrote to him and said...

Tell Kimberly (his wife)that I said, She sure has aged much better than you! :)

It's the motorcycle and tatoo. Ha!

Seriously, we're so grateful to have someone to pattern ourselves after. Congratulations on living well and on the pathway to finishing well. Love you guys!

I may be the one with the motorcycle but I DON'T have a tatoo. You KNOW who has that!!

"We both have pistols but have never really learned to use them. This is NOT in case we get mad at each other in the coming year. [Joking]"

Joking ... hmmm .. does that mean you ARE taking lessons in case you DO get mad at each other in the coming year?

Knowing you two, I'm guessing that's not the case, but you had me going there for a minute.

Heartiest congrats you newlyweds, you. We passed 51 last March 13th.

Your Word Verification has cleaned up its act but could use a little help spelling. This one: "totyp".

Congratulations from t'other side of the world.

A bit of trivia which speaks volumes: Between,you, Bob and I and our spouses, we have one and one half centuries of experience in marriage!

Looking forward to the next fifty.

I did marry up and she's aged better than I have too. That's nailing it twice my friend. ;)

You have this way of seeing right through my jokes. :)

That gives us a little over 16 years each. The way the last 16 have gone that will go by in the blink of an eye don't you think? ;)

Happy Anniversary to you and Mary Paul. I love both of you.

Paul,
Nice pose with your daughter. :) Congratulations.
Pistol lessons?
We’d been married two months and I had my fifth grade school class taking turns at shooting a 22 pistol at a seagull fifty yards away. It was floating on a lake at King Cove, Alaska. That was a small fishing village where the largest brown bear in the world was killed. It was 500 miles from Anchorage.

We’d all taken a couple of shots without scaring the bird when Belle walked up.
“Mrs. Ray, you shoot---you shoot.”
“Bang!”
All kids yelled, “$25 fine - killing seagull!”

Rodney,
Any husband that didn’t “marry up” is stupid. :)

In my case there was no question as she was valedictorian and finished college in three years where it took me five. Even though I was older, she had taught school three years while I was Airman 2nd class, and even fooled her into thinking I was going to be a preacher. Later in life, she may have agreed with her father who told her before we were married, “Now Rex is a good boy, but understand one thing – he will never grow up.”

I stop looking when I picked this card because it reminded me of picking you.
In our days of travels and stays, I have no regrets.
You’ve been by my side all those miles, or who was following who?
The travels were fun and exciting, or were when looked back on.
Maybe looking back was the best part, as the stays were long and sweet.
The stays were where our children grew and that is the best that remains.
They joined with life partners and started their own nests.
Their children became our joy as they grow in resembling ours.
We could not love them as much if we did not love their parents more.
So in closing, I can’t remember not loving you.

May you be blessed with many more years of life together, with all its diverse moments of adventure.

Thanks and it is truly mutual.

Great poem. Great last line to the poem. I know the feeling. Thanks.

Mary was with our granddaughter once in a little bit of a scary place in the woods and Sierra said.."Grams is this an adventure?"

We think of that often and have learned to make even "stirring the oatmeal" an adventure. Thanks for reminding me of it.

Mary and Paul,
Congratulations on your 51 years. You two have been a living example to many of us in the area of love and respect, working through the hard times and sharing it publicly.
Thanks for living the Jesus life.
Ken Colson

Thanks for stopping by.

We still would like to get all you guys/gals together who were with us at Southcliff while in seminary at SWBTS and share how the intervening years have brought a difference in our understanding of scipture, our understanding of life and Grace and a whole bunch of other things. We may have to wait til we all get to heaven to do it, but we've got a lot to share.

I think all adventures are a bit scary simply because by definition it means we are traveling into territory that has at least some unfamiliarity.

Whether it is a child going into the woods, being married, or journeying with the Trinity there is an element of scariness.

Absolute stability and absolute chaos are both deadly but the interface between stability and chaos, there is adventure, growth and life.

"Absolute stability and absolute chaos are both deadly but the interface between stability and chaos, there is adventure, growth and life." This is one of those statements that I read/hear and have to apply the words "Simple" and "profound" to with the same breath. Outstanding.