SOME WORDS ON A WORRISOME ISSUE [From my often not-so-wise, in the opinion of many, point of view on things political.] 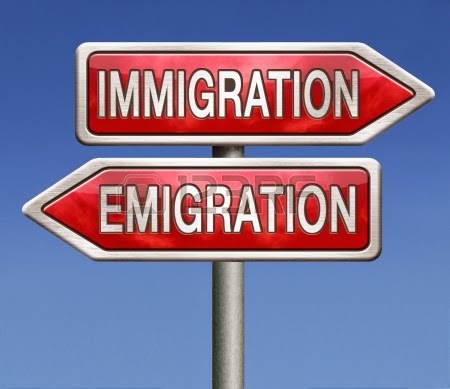 There are scores of present-day stories that could be told of people who have immigrated to the shores of America and who, through legal means and in a lawful manner, have become a productive and proud segment of our society. Their work ethic is often second to none and match the work habits of the hard working immigrants, turned citizens, of our past. Many present day legal immigrants and many who have already become Naturalized Citizens live next door to us and are productive, proud, tax paying citizens who LOVE America and put forth an effort to raise families and build a value system that does America, their new home, proud.

So, I believe it is "nigh on to impossible to paint with a broad brush" any conversation about our immigration problems and be accurate in the doing of it. The Conservative who loudly and angrily cries, "close the border, and if you don't, you're giving away American jobs," is shouting an over-statement to a serious problem. The Liberal who shouts just as angrily and just as loudly, "Open the border," and if you don't, the 'send me your huddled masses yearning to be free' statement, is a total lie,  is shouting an over-statement as well, IMHO.

Both groups and statements may, in fact, be evidencing that ideology at least APPEARS to mean more to the adherents of those two positions than does solving the problem. Our immigration issue at present CANNOT be limited to such "broad strokes" that make it a one-dimensional idealogical issue. No one denies that the present chaos on the border, which may have come about because of ambiguous language being used by American politicians, has to be solved with some impunity involved for those who can be accurately defined as children. ["Impunity__exemption from punishment or freedom from the injurious consequences of an action."]

It is also evident to me that Faith-based groups need to jump in with both feet to assist these children with little thought given to the politics of it all seeing it as a Kingdom opportunity for some real Kingdom ministry. But, just as I believe it would be a Constitutional violation for Conservatives to demand that our government declare that "Jesus is the only way" of salvation, I see it just as much a Constitutional violation for liberals to try to get the government to do "what Jesus would do" with regards to this issue, since not all Americans are Christians and our Constitution forbids the establishment of any religion. All this is a given, it seems to me.

You can see that there are more issues than sometimes meet the eye which simply do not lend themselves to simple black and white answers such as opening OR closing the border, period! And we simply cannot IGNORE the consequences of our actions pertaining to our borders by FAILING to build a LEGAL safety net.

So, Congress must be wise in passing new laws and regulations dealing with comprehensive immigration guidelines that can be consistently and constitutionally applied in every state of the union. The outcome of ANY AND ALL new immigration laws or rules must incorporate a sensible, yet expeditious, period of transition with a clear goal of how ANY new immigrant who is legally qualified, can become a new American citizen.

“Amnesty for all” MAY NOT BE the best approach as we face the future of immigration reform.  However, amnesty "for those who have lived and worked" a significant part of their lives in the communities of America may be a sound approach given certain sound and sensible limitations. Selected amnesty may be a necessary part of the equation.

I don't know all the answers. I don't even know how to ask all the right questions yet. But I do know loud, angry, mean-spirited arguments on EITHER SIDE of the issue exacerbates the problem rather than moves toward solving it. [I'm assuming Christians would want to refrain from this kind of rhetoric regardless of political views.]

Our problems in this area are not as difficult as those in your country.

On the one side we have politicians who would allow everyone without restriction to come illegally or legally. On the other are those who want orderly immigration by those who apply through the appropriate channels.

The first mentioned don't seem to consider that of those wanting to enter illegally by small boats more than 1000 men,women and children have perished at sea.

There are serious dangers with the uncontrolled multicultural approach to immigration have arisen with the development of ghettos of individual nationalities, some of whom are being radicalized, anti-Western, anti-Christian, by their leaders.

I'm afraid there are a multitude of "unintended consequences" that follow much, if not most, of what goes on politically in both our nations in the present day. It really is a sad day in many ways. But the Kingdom of God moves on. For that I'm glad and thankful.

Long before this recent influx of immigrants, the same thing was happening only in fewer numbers and much less obviously.

My son is a tile "layer" (for lack of the proper term), and has for 25 yrs. worked for companies who have hired immigrants from Mexico and Guatemala primarily. He has told me that if they are discovered and sent back, they simply buy another false identification and return. That's the simplistic explanation for methods used to gain entry in order to work. He's resented the fact that for numerous and obvious reasons.

I, however, feel compassion for a man who wants to provide for his family and is willing to leave them and live 10-12 in a small room and work in Florida's unbearable heat to send money back to them so they can live on more than bare necessities. Many are desperate for just a few of the things we take for granted in our country.

When my sister wanted to live in New Zealand, she said their law only allowed a 6-month residency but employment extended that timeframe considerably. Pretty sure I got that right as it was some years ago.

I have no answers to the current problems facing our country, but I've heard that it can years to become a naturalized citizen.

I think I'll review the history of Ellis Island. :)

I agree. That's why the germane word in this statement, "The outcome of ANY AND ALL new immigration laws or rules must incorporate a sensible, yet expeditious, period of transition with a clear goal of how ANY new immigrant who is legally qualified, can become a new American citizen."..is the word, "expeditious."

But I'm afraid "expeditious" and "politicians" are mutually exclusive words and are an oxymoron at best.

Our church song leader and his wife are from Romania. They have been with us for more than three years. I don’t know of anyone that trust in the Lord more than them. They first came as students, but have tried to become citizens for along time. Their son was born in America over ten years ago. Recently, they had a lot of trouble even with renewing their driver license with all these new rules.
Rex

The following was written by our song leader:
“I may not know to what extent this so-called immigration reform will change things for the better—with all the political and economic implications—what I believe is immigration reforms have never amounted to more than putting new wine in old wine skins. Right now, as always, politicians do what politicians have always done, trying to play the situation to their advantage—can you blame them?!!
For example, it is my belief that the current immigration overhaul does not do anything of importance in helping or improving the law abiding immigrants—all the application fees doubled or tripled in the last decade—instead, it goes head-over-hills trying to win over a new class of voters.”