THE END OF IT ALL 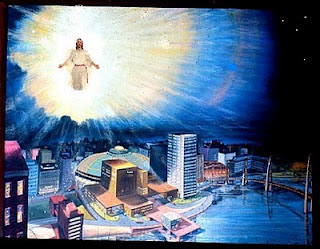 Harold Camping, a minister from Arkansas, is quite well known for having predicted that Jesus Christ would return to Earth on May 21st, 2011, and on that day all saved people would be raptured to heaven which would be followed by five months of fire and brimstone accompanied by plagues on Earth, with millions of people dying each day. It would all end, Camping said, on October 21st, 2011, with the final destruction of the world. Camping had previously predicted it would all end on May 21st, 1988 and September 6th, 1994.


I don't know whether he's finished with his predictions or not__probably not__but the sad part is people will likely listen to him if he does and, even worse, take him seriously.

I want to say something about that kind of end times mania.

First of all, when thinking about the day of the return of our Lord, a priority should be to ALWAYS look to the scripture for knowledge of that day. When we do that, to believe that ANY one would have ANY right to say with ANY kind of specificity about when that day would be, obviously, nipped in the bud. Jesus warned us that false prophets would, indeed, arise speaking about end times and any person who would attempt to set an EXACT day or date for His agenda to be accomplished has identified themselves as such. [Matthew 24:24]

So what does the scripture say about being able to pin-point the day of His return? NOTHING!  If you go to Matthew 24 and try to show that the signs of His coming can be read, we'll have to agree to disagree because of my present conviction that Matthew 24 is, when properly understood, a declaration of the coming destruction of the Jewish age and NOT a prediction about the end of all time. [Obviously, I'm no longer of the dispensational persuasion.]


I say this because when God made His covenant with Israel He described it through Isaiah the Prophet this way..."I Planted the heavens and laid the foundation of the earth, and said to Zion [Israel], You are My People." [Isaiah 51:16]  What a descriptive, apocalyptic way of speaking of Israel and her covenant with Jehovah. Remember this when you read Matthew 24.

But that covenant was violated and so it is said that judgement came upon her. [Israel] God describes that judgment with the same kind of apocalyptic language used in Isaiah with words like the "Destruction of heaven and earth." [Matthew 24]  God says that "earth and heaven" [Israel] will reel from His judgment and describes how it will be so severe, He believes it necessary for Him to assure Israel that "heaven and earth" might pass away, but His Word will remain forever. [24:35]


He also said  [24:34] that the generation then living, [His contemporaries] would not pass until this judgment upon the "heaven and earth" [Israel] would be finished. It was finished in 70 AD with the destruction of Jerusalem and the ending of the Jewish age. The fulfillment of the Jewish system of sacrifices and the establishment of a New Covenant were all accomplished at Calvary. The Old had truly grown obsolete and had fulfilled its purpose clearing the way for the New.

That NEW COVENANT, having now been established and ratified by His blood on the Cross, is NOT based upon race, gender or age, and even has a new law, given by the new Lawgiver, the Lord Jesus Christ, written in the hearts of His New Covenant people. [The Law of Moses having had it's place in the Covenant with Israel.] But now a new day has dawned and a new era has begun.


This new era will, indeed, see Him coming again one day. That is seen clearly stated in Acts 17:31. A day has been appointed when Jesus will return as the appointed judge and will judge the world in righteousness. But His "coming again" holds NO FEAR for believers as He will at that time come for them with no reference to sin at all. [See Hebrews 9:28.]

It is true He came for sin the first time, being the final sacrifice, the High Priest who offered Himself and took His own blood into the Holy of Holies and placed it there on the mercy seat,  thus, ratifying the covenant with His broken body and shed blood. But His Second Coming will have no reference to sin for the believer whatsoever. He will be coming as King of Kings.

His coming again will be to establish His Kingdom on this earth which has already been established in the hearts of His people. When He returns the new heaven and new earth will be seen for what He has always intended. Since His ascension He's been preparing a place for us. Then, because the first heaven and earth will have passed away as stated in Revelation 21:1, the "meek," those broken in repentance and faith yielded to Him called "Christ-ians," will truly inherit the "new heaven and new earth."

So, what value is there in getting caught up in any "end times" controversies such as trying to say when it will happen or even listening to a false prophet who tries to give a date? NONE!  We simply live proclaiming the words of John who ended his Revelation record with that powerful personal exclamation in Revelation 22:20 that is so famous. THOSE are the words we  listen to and have ringing in our hearts____"Even so, come, Lord Jesus!"

Your writing, “The fulfillment of the Jewish system of sacrifices and the establishment of a New Covenant were all accomplished at Calvary”, is exactly what another Paul was trying to pound into the heads of the Jerusalem church, but they wanted to kill him for trying to make them think different as shown in Acts 21:20-22 NLT:

“…they all follow the law of Moses very seriously…have been told [by their leaders?] that you are teaching…to turn their backs on the laws of Moses…not to circumcise their children…What shall we do? They will certainly hear that you have come.”

I believe the thinking of the Jerusalem church was the roots of Catholicism and provides the oldest ‘Cold Case’ of the murder of Paul.

If some of these "prophets" were to preach/teach the centrality of Jesus Christ in the history of mankind,the implications of His inauguration of the New Covenant, the certainty of His coming, His people would be eager for His return, and well prepared, whenever that great and glorious day comes.

Am I unjust in suggesting that a fair amount of egocentrism is often on display in many of these experts?

Thank you! I agree,as I've met some of these "experts", but didn't want to lay it on too thick.

I do have concerns for those who have the capacity to study the Scriptures, yet blindly follow these people.

By the way, my keyboard has the same HUGE problem as yours :)