THE RACE OF GRACE 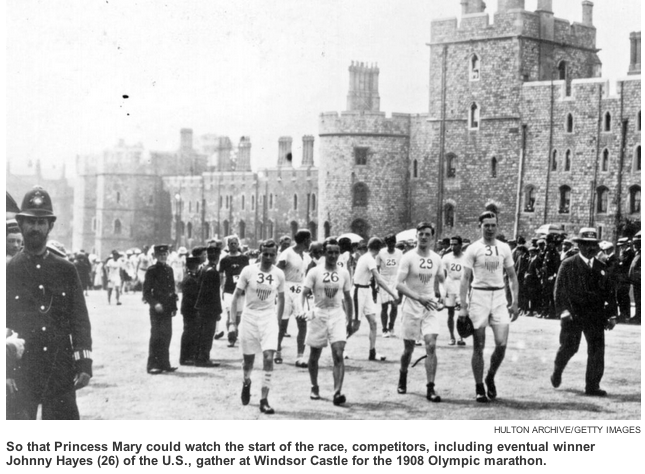 One of my favorite passages of scripture is Hebrews 12:1-3 which shows how we're to run the race [marathon maybe] of the Christian life. This is also the season for races as my wife is at present preparing for the Oklahoma City Marathon which will take place next Sunday. So, I got to thinking about marathons and the Hebrews passage came to mind.

It's interesting to me that marathon races, like Boston and other places, are 26.2 miles in length. But they were not always that distance. Before the 1900s they were approximately 25 miles in length [the location made for some variation] which originally was, as legend has it, the distance a messenger named Pheidippides ran from Marathon Greece to Athens to tell of the Greek victory over the Persians. Having delivered the news, the story tells us he immediately fell dead from exhaustion.

It wasn't until in 1896 that the Modern Olympic games came into being and the marathon was re-instituted as a major event. Then in 1908 the Olympics were held in London. The reason? They were to be in Rome that year but Mount Vesuvius erupted and for obvious economic reasons Rome could not prepare and so they were switched to London which caused King Richard V11 and Queen Alexandra to become de facto advisors to the games. It was decided the marathon event would start at Windsor Castle and end at White City Stadium 26 miles away. So far so good. But you and I know the Brits.

Princess Mary and her children couldn't see the marathon begin from her room in the Castle and she so wanted to see that start. To accommodate her desires the race was lengthened by moving it to begin under her window which added 385 yards making the distance 26.2 miles. So now, with her wish the Empire's command, the Brits had effectively changed the marathon to start in the presence of Royalty, the children of Princess Mary, with the finish set to end in the presence of Royalty, in front of the King of England, a capricious egocentric, sitting on his throne inside the White House Stadium. So the 26.2 marathon was introduced to the world. In 1924 this 26.2 became the official distance for all marathons.

An interesting historical note that adds flavor to the whole thing was that the flag of the United States had not been allowed to be displayed above the stadium [with the flag of Ireland not flown as well] during the opening ceremonies and this, with the added length of the race at the whim of that King already described, did not sit well with the American flag bearer, Ralph Rose. It was he who then subsequently refused to dip the American flag to the King at the opening ceremonies.

It is reported that fellow American Marin Sheridan supported Rose in this act of defiance and showed it by stating to all,"This flag dips for no earthly King." That statement was reported long after Sheridan's death so some believe it to be untrue. Regardless, what ensued was the most debated and hated Olympiad perhaps ever. Time doesn't permit the telling of more ridiculous events that transpired.

Regardless, the end of the marathon was a moment to be remembered you can be sure. I'm fairly certain the runners were not thinking so much about themselves, as much as having to look at the one who was to greet them upon their finish, the English King whom they seriously disliked. One can assume their minds were not fixed on themselves as much as one would expect a runner to normally be doing. They were "looking off"  [At the despised King] as they reached the finish line.

Hebrews 12:1-3 says we will be greeted at the finish line of our marathon race as well, and it will NOT be by someone who is capricious or controlling as was the earthly King, Richard the Seventh, but by One Who loves us and endured the Cross, despising the shame, and having set down at the right hand of the Throne of God has, by His Grace, made it possible for us to be entered in the race and gives us His very life and strength to finish the race. [Hebrews 12 :2]

So what we're told in Hebrews is to not be entangled with sin as we run the race with endurance, but we are to be wise enough to legitimately be "looking off unto Jesus." This can mean nothing less than having eyes fixed on our Lord instead of keeping our eyes on ourselves, even if it is just to be checking to see how well we are doing spiritually.

He IS OUR LIFE and He did it perfectly. So, let's run our marathon of life with our eyes fixed on Him alone and not with any emphasis on our sins, failures, successes, our ANYTHING. We do sin. We do fail. And once in a while, we do succeed. But none of that really matters. Our mind and our focus is on someone else, the King of Kings, who really IS worthy of our attention. He is to be our focus while we're running the race.

By the way, the end of the race is approaching. What a difference our mind-set is from those who ran in that 1908 Olympic Marathon. What a different kind of King awaits our finish at the end of our race. It is truly a GRACE RACE.

Your throw away sentence, “By the way, the end of the race is approaching.” I believe, needs to be put into perspective with respect to the distance that still needs to be run in mankind’s marathon race of life.

At present we are around 6,200 metres from the finishing line and the cares of the world are still crowding us with fears to distract us from reaching the finishing tape but those fears will fall away shortly for a time until the last 150 metres or so of the race remains when the race will become crowded with people jostling to reach the finishing line first but it is not about being first that is really important. What will be remembered about our race is how we ran the race of life from our starting point to our finishing point and the legacy/baton that we were able to hand on to those who joined into the race when we were spent and fading away.

At the finishing point all of mankind will see the outcome of the race and we will be separated by our focus on Christ in our lives and the good that we do along the way to help others in their journey of life without regard to “winning” the “race.” At that time the first will be last and the last will be first and those who are judged to be righteous will be told to receive their inheritance in the earth through God’s Grace that was displayed during our life and observed and understood by others who were able to also walk in our footsteps that were in Christ’s.

Hearing a "well done" will be winning enough, right!

Did not know that Mary was a marathon runner, literally. That is tremendous.

Don't mean to begrudge people with long drawn out life statement sentences but I learned many years ago to keep it simple: "Don't mess it up and finish strong." With my focus on Christ I will end well and hear the words "well done". Can't get any better than that.

Thanks for the reminder of a Grace Race; very true words.

Actually, this will be her first one. She's starting with the short one, a 5k thing. She's training and I'm getting excited for her and proud of her. A little worried too. But, hey, why not at 72 when you're in as great a shape as she is! LOL

I wish the runners, officials, helpers and supporters fair weather and a good marathon, or shorter distance, in tomorrow's Memorial run . What a tragic event that was that shocked the world!
My son , John, has run the full Memorial Marathon for the past several years, and we pray there will be nothing to spoil the event as in Boston 2013 or London 1908.

Philippians 3:14 "I press on to reach the end of the race and receive the heavenly prize for which God, through Christ Jesus, is calling us".

Christians,too, should be faithful,steadfast, and keep right on to the end of the road.....not like Dorando Pietri in front of King Edward V11 in 1908 !

Our youngest daughter has taken us on a two week long, 3800 kilometre round trip to visit children, grandchildren and great grandchildren. Arriving home I feel as if I had run a marathon.

I'm gobsmacked to say the least, about your wife's stamina and courage. Thre race is probably over as I write, but, best wishes to her anyway.

My precious wife is quite crippled up and couldn't run one step. I'm not much better, but your comment about Hebrews 12:1-3 is so important to me; "He IS OUR LIFE and He did it perfectly. So let's run our marathon with our eyes fixed on Him alone and not with any emphais on our sins and failures, successes, our ANYTHING... etc".

Sometimes, we get a glimpse of the end of the race from time to time; it exciting!