SEVEN LIES THAT CAN TRAP A MINISTRY---PART THREE 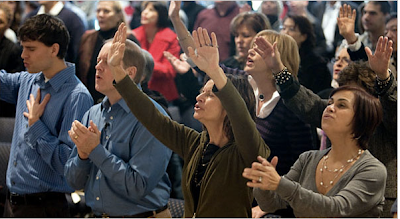 We're continuing to look at some very subtle lies which, if believed, can trap a ministry or minister in ways that may not be thought about early on in that minister's life. But the need for knowing the truth is overwhelming in my view. I will show why this is true in a bit

We've seen two lies so far. You can read the last two posts for understanding. They are...

2. They did it..I should do it too to be spiritual.

Now we turn to the third lie and it is.."They'll come..if you preach the Word."

As has been the case in the first two posts, these lies are drawn from my own experience and recovery so I'm continuing with a personal flavor to what is written here.

Success has been generally measured in Southern Baptist life by numbers. Whether it's the numbers that are reflected in salary or experience or the Convention itself, [14 million Convention members half of whom can't be found] it's a fact that numbers play a big role is measuring success both in the view of congregations and individual ministers.

But no numbers are more talked about than is the attendance on a given Sunday in the local churches. Traditionally that attendance was posted on the wall for all to see. Thankfully that has changed somewhat, but still, when gathering for a ministers conference, inevitably the ministers remark about how many were present last Sunday and how it was more, if the ministry is thought of as truly successful, than last year's attendance.

I'm assuming that we all know there is nothing inherently wrong with speaking of attendance...unless it becomes a statement about the church or the minister and a definition of the success of either. With respect to those who hold this view, I have to say, that just isn't the biblical definition of success at all as I'll show later.

Then, unfortunately, some add to that the idea that attendance is ASSURED with the preaching of the Word. I cannot tell you how often I've heard said, or worse said myself, "Just preach the Word and people will come because they long to hear the Word of God. Not enough men are giving the Word on a regular basis."

When you put together those two concepts you have a lethal formula for defeat, depression and even despair. It winds up as.."The attendance isn't growing/increasing/ I MUST NOT be effectively preaching the Word." Often it becomes a comparison thing when one hears..."The crowds are going to hear_______, and I don't believe he's preaching a thimble full of real truth. I'm guilty of something or the Lord wouldn't be punishing me." [Wrong theology of success and sins being punished go hand in hand it seems to me.]

Let me say a couple of things at this point.

One is that I believed this for a while BECAUSE of my own success with numbers attending. I preached..they came. I knew it wasn't me. So it was the Word for sure. It was accomplishing the purpose for which it was sent out. [Remember my belief was purpose is numbers coming.] For sake of example, my pastorate in 1968-1972 grew numerically. My pastorate in 1972-1976 grew numerically also. My pastorate in 1976-1982 exploded numerically. It was in this last mentioned pastorate that I was able to minister to many seminarians who saw that explosion of attendance. The conclusion was that I was preaching the Word so of course the people came. Sounded right/good to me.

Then came another pastorate. Same preacher, [me] same sermons, [mine] same philosophy, same goals in ministry, but different results. I will leave it at that for now. Just know that I had a great period of depression which challenged my own ministry to a massive degree. I came through that time but I had learned a real lesson or two. Let me close with those.

Lesson one that I learned... Congregations are different. Matthew 13 teaches that if nothing else. There are different kinds of soil the seed of the Word is sown into. No entire congregation automatically responds to the word. Some do long for it, but some can often fight against it out of pride, sin, or apathy. Their hearts can be hardened, worldly, cold, or hurt. Anyone of those conditions will affect their response. Whether the church happens to be a first Baptist Church, and old baptist church, a new baptist church, white collar, blue collar, what it happens to be often can affect their response too. Need I go on?

Lesson two that I learned...Sermons that minister to one flock do NOT automatically feed another flock because of the former statement. So if a preacher is preaching the Word but he hasn't heard from the Spirit as to the REAL needs of the congregation and deal with the scriptures accordingly, there may be a disconnect.

Lesson three that I learned...The scriptures indicate that two preachers preaching the same sermons under the same genuine anointing of the Spirit may have a different response that can only be seen as a thing of Providence. Peter preached on Pentecost, many responded in brokenness and salvation. Stephen preached the same sermon [check it out] under the same anointing and the congregation got mad and stoned him to death.

And, by the way, THAT is the biblical definition of success "FAITHFULNESS." It takes the power of the Spirit. It takes a committed servant. It takes a Sovereign Savior. When and where you find all three present..you have a ministry/church/Convention/person who/which is a true success biblically.

Another lie to be corrected next time.

Peter and Stephen preached the same message both faithfully under the leadership of the Holy Spirit in Peter's case many the many in the crowd repented. In Stephen's case...many in the crowd threw rocks! Yet in both cases Christ was exalted and God's purpose was fulfilled!!!!!!!!!!!!

Gee thanks for the reminder :)

"Yet in both cases Christ was exalted and God's purpose was fulfilled!!!!!!!!!!!!"...is true in the life of both Peter and Stephen for sure.

Oh may WE learn!

It is hard to belive I was an English major in college!

I guess that is what I love about how the different Gospel's portray Jesus' teaching ministry.

Crowds of people are coming, that's for sure - but mostly to watch the miracle worker do his thing.

But then Jesus gets to talking, and the different Gospels describe the results differently. For Mark, Jesus speaks to confuse the crowds - so that those who do get it are the ones God is bringing into the Kingdom (and when you, the reader, discover that Jesus' riddles make sense then you are brought into the Kingdom journey as well!). In Matthew, Jesus speaks to illustrate concepts to the crowds, to make things clearer, and it works! Sometimes, things are so clear that the crowd walks away thinking Jesus is crazy or an idealist (or both, as they often go together).

And Paul didn't seem to have much luck with his preaching ministry - he got laughed at more often than not. Some Corinthians actually tried to disown Paul because he wasn't an eloquent enough preacher (and I imagine we all know a contemporary preacher or two who can relate to that)!

But I don't think we would accuse either Jesus or Paul of not "preaching the Word," after all, their words make up most of our NT canon. Both died for their faithfulness. So an increase in numbers just seems preposterous as a useful guide to successful preaching, imho.

Great series of articles, which ought to be necessary reading for all of God's people. If all have a ministry, as I believe they do, then all are susceptible to what you have written about thus far.

"... It is the purposes of God we do not always understand and it is ours to simply be faithful in whichever results God has providentially placed us".

It took me far too long to realize that fact, and that our sovereign God leaves no stone unturned to achieve His purposes, all to His honor and glory. We get hurt when we think we know best and want to share the honor and glory.

Paul,
Looking back to Southcliff days, Rhonda and I worshiped in a wonderful church, with a wonderful pastor. The growth came as you directed us to the WORD and to the Throne. Yes, we tapped into you for a short while, but the whole purpose of Southcliff was to direct us to The Father from whom we learned to feed. Thanks for pointing the direction for all of us. We look at those days as times of beginning growth and acquiring direction for later ministry.
Thanks to you and Mary.
Ken and Rhonda Colson

All of you guys are a blessing to me with your responses. Thanks for continuing to read and comment.

I got an interesting e-mail from a friend that sent this blog post [via e-mail] to another friend who was in a church I pastored years ago when I was using the 2959 plan of Peter Lord as a tool. I've confessed how I miss used it but she was able to testify how much of a blessing it was to her. I answered my friend with an e-mail that I don't think she would mind me sharing with you guys. It's interesting how all this plays out isn't it!! Here's what I sent to my friend Barbara.

Thanks for sending this. It's in interesting how a good thing [2959 plan] can become something other when someone [Paul] misuses it but remains a good thing when someone [Norma] used it as a blessing. That shows things go wrong because of people NOT the thing itself.

That's the principle I now see in drinking wine too. In fact ALMOST anything. Interesting!! Thanks again.

What about brandy? Does the principle apply to brandy, too?

This is just between you and me..no one else is to know..baptist deniability you understand..."Yes." ;)

Paul,
You said you preached the Word the same way and your first three churches grew in numbers while your forth church did not.

The lack of growth of the fourth church caused depression and despair.

This is a hard question, but instead of lack of growth, what would you feel if over half the church left and joined other churches?

With reference to where I was, I would have preferred that sometimes to them staying around fighting with everything I tried to do when originally they had said it was what they wanted also. Their change came because they didn't like me personally. I preached holiness too much was one of the statements made in a public meeting. Whatever. Those were days I learned a lot and now have gone on to other days.

Remember, this is not a reference to All the people. Just the loudest.