CELEBRATING THE FOURTH OF JULY IN A GATHERED MEETING OF BELIEVERS 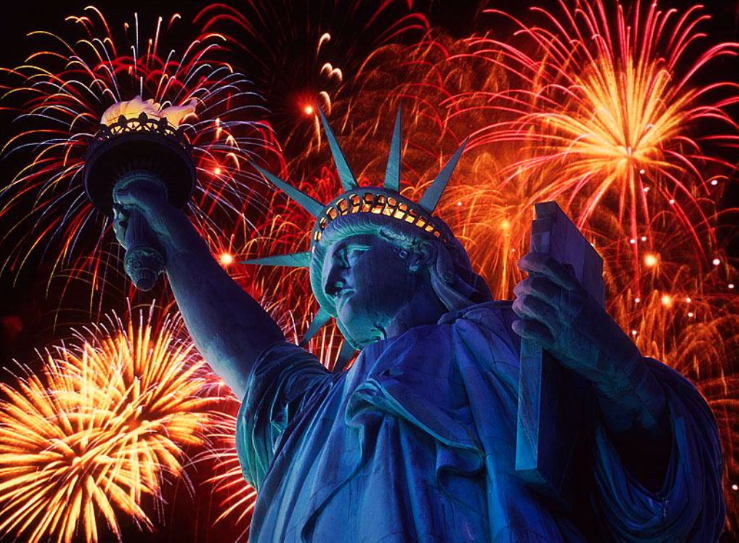 Some Christians do not believe an American flag should be on display in a church building. Some do not believe any nationalistic elements should ever be displayed when a congregation gathers to worship God because people from other nations, who are or are not believers, may be present. I understand the argument and even share some sentiment with it because of the danger of seeing Americanism become our focus, and worse, our object of worship. But I'm thinking there is a possibility of celebrating our nation's birthday without violating our principles. I wish to address that possibility in this post.

I still often experience a lump in the throat at the singing of the National anthem.The people of the armed services are heroes to me along with law enforcement and firefighters. The loyalty expressed by the Marine Corp, especially, causes admiration to well up inside me when I see it played out in movies or on television. The decorum at a military funeral brings that before mentioned lump, every time. As an American I resented the shabby treatment given to the Vietnam veterans and still do resent any less than honorable treatment of any veteran because I'm a grateful American citizen as I've said...several times...and mean it every time.

But I'm a Christian first. My sovereign allegiance is to my Lord. I  also believe there is only one way to have a relationship with the God of this universe. He created that Way in the giving of His Son, Who is Himself, the "Way, the Truth, the Life..." The gospel is the message of that Way and, consequently, my message for all people is the gospel, which, in my opinion, is the only eternal message of hope for any person or nation of peoples, including America,

You see, I don't believe America is a Christian nation any more than I believe music, businesses, organizations or companies can be Christian. Only the people who do them or run them can be Christian. It takes a personal relationship with Jesus Christ through faith for that to happen. So it isn't going to happen to a government, company or song for obvious reasons.

It is true that our nation was founded upon some solid Judeo/Christian principles that gave birth to a unique form of government. In fact, America is the only nation in history to be founded on the combination of Judeo AND Christian principles. America is, as I heard someone say, "an idea, as much as a nation." I agree! But "Christian" is not descriptive of nations.

To our Founding fathers the God of the Hebrew scriptures, as well as the Christian scriptures, is the God they looked to in drawing up our Declaration of Independence and Constitution. Our founding fathers hammered those principles out using a belief in the God of the bible AND the God revealed in natural law. This led to an obvious belief in a value system based on absolutes instead of a changing variety. But that's different than being a Christian.

Many of our founding fathers were not Christian in the gospel sense. [Faith in Christ alone] They did, however, including those who didn't happen to be Christian, have a healthy respect for the God of law and nature and even the God of the bible as I said, and I'm glad.

You can see I do NOT believe America and Christian are synonymous. When I gather to worship with others on the Lord's day I celebrate Jesus and His Grace work of the Cross. I'm celebrating with any person who names Jesus as Lord regardless of their nationality or present national citizenship. We are, together, citizens of another country.

All that said....to have a brief moment in a worship service where we, as Christians, thank God for America and for those who have sacrificed for her liberty and pray for her leaders, is for me at least, a legitimate expression for the gathered Body of Christ on the right occasions to be done in the best way possible. The fourth of July would be one of those I would think.

Were I to lead a congregation on a Sunday close to or before the fourth of July to do what I've just suggested, I would want to make sure that what I've said in this post thus far, is very clear. To do that I probably would [and did in the past] list my top "nine points to remember" and place it in the hands of all worshippers that Sunday. Those nine points to remember would be.......

One----We worship the Living God through Christ today, NOT America.

Two----We ALL are citizens of two countries, wherever your earthly citizenship might be.

Three--As Christians, our ultimate allegiance is to our heavenly country and King Jesus.

Four---Most of us, generally speaking, are citizens of America and it's her birthday, so we say "Happy Birthday."

Five---We further honor our American citizenship with obedience to her laws where it is possible to do so without violation of the scriptures as we understand them.

.Six----We also honor those who have paid the price for this freedom we enjoy in America and the freedom we have to serve our Lord supremely.

Seven-We love to celebrate our nation's birthday but it isn't an act of worship.

Eight--We are commanded to pray for our nation, her leaders, and her problems and we do so.

Nine---But WE DO NOT BELIEVE THE GOSPEL has anything to do with being an American.

This is my personal effort to be true to the gospel and celebrate my American citizenship.

I rejoice in both, but I will not make the mistake of thinking of them as synonymous .

Fourth of July is just another beautiful winter day, and has little effect on Australians, other than news media reporting thE Americans" celebrations.

Thankfully we haven't become infatuated with ourselves as "God's special people" as many of your compatriots do(and as I learned at a couple of conferences I attended in N.J.) ,and Australians haven't developed the belief that the Gospel has anything to do with being Australian; mind you, most haven't any belief that affects spiritual issues.

Really not much difference. Would you agree?

Your personal honesty, and realism is a breath of fresh air, and I pray that your tribe may increase dramatically.

This struggle with living in a culture and giving honor properly to it where due, [Render to Caesar] and yet not being bound by or identifying it with our walk with our Lord, is, I think, an on-going thing regardless of where one is a citizen.

It may be a little harder in America because historically, we HAVE crossed the line at times.