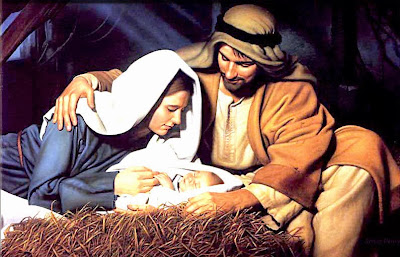 It's Monday following the infamous Sunday. I mean the Sunday when I posited before a rather large group of senior adults that some of what we assume as Christmas facts may be more fiction than we realize. [My audience was quite complimentary by the way.]

In reporting to my Face Book friends about what I intended to do, a request came that I write a blog giving the material presented on that Sunday. The words before you fulfill that request. For what it's worth. Remember, there are no clear conclusions about some of the things mentioned here, how many wise men there were for example, but the myths I'll be dealing with I've stated in the traditional statements given as fact, rather than assumptions, then I present my differing view.

With that, let's begin.

Myth number one___Jesus was born the night Mary and Joseph arrived in Bethlehem.

The language of Luke 2 indicates that there is the possibility that Mary and Joseph had been in Bethlehem a little while before the actual birth of the Christ child. The phrase in verse 6 that says, "And so it was, that, while they were there, the days were accomplished that she should be delivered...." do not necessarily intend to mean the very same night they arrived. According to Lenski, it was not so.  "This, [the day Jesus was born] was NOT the day of the arrival of Mary and Joseph." [Emphasis mine]]

The Message picks up on this when it records verse 6 this way, "While they were there, the time came for her to give birth. The language is too ambiguous to state with certainty that it was upon the arrival of the couple that the child was born.

But what about the fact they could find no place to stay?

That leads us to the second myth.

Myth number two___There was no room for them in the public Inn.

Notice that the text of Luke, or any other gospel writer for that matter, makes no mention of an "Innkeeper." His presence is assumed since is stated that they received information that the place was full. The assumption being there HAD TO BE an Inn-keeper. But it is the place itself that is really in question here.

The English versions of the scripture, think KJV,  chose an unfortunate English word to translate "Kataluma" [I'll only give the English spelling of the Greek words for simplicity.] which was the Greek word Luke uses here for "Inn.". It gives a completely wrong impression to anyone in the West. An "Inn" to us is a motel of sorts, albeit, a kind that would be found in that day. But that isn't what the word meant back then at all, and Luke knew it.

You'll find it to be the same word he used in Luke 22:11 where he told us of Jesus telling His disciples that when they got to the city, they were to ask the Goodman of the HOUSE, where the GUEST-CHAMBER [kataluma] was, so He and His disciples could observe the passover. There is the word "Kataluma." [Guest-chamber] and notice that it is located in a home.

The fact is Luke knew this word well while writing about the birth of Jesus since he was going to use it in reference to Jesus and the passover later in his book anyway. Furthermore, there was another Greek word that did mean INN [pandocheion] which Luke would use in chapter 10 of his book when he told of the "Good Samaritan" being taken to an INN, and even the word for an INN-KEEPER [pandochei] was used there as well.

Was Luke confused? I don't think so. The probable answer to this is that when Mary and Joseph arrived in Bethlehem there had been no room for them in the Kataluma or in English, "GUEST-ROOM" of the home of a relative with whom they intended to stay.

I think to be more in line with the language of the text of scripture for us one to believe that the birth of Jesus more than likely went this way.

Joseph and Mary returned to Joseph's ancestral home called Bethlehem because of the census that had been required for the Roman Empire and this means other members of his lineage had to gather in Bethlehem as well. The normal procedure would be to go to a relative's house and find a place in their guest room. But with all the other family members gathering as well, they found it to be, as we say in Oklahoma, plumb full.

So Mary and Joseph were forced to stay below in the lower level of the house which was, by the way, the cooking and living quarters of the home-owner. It was also the place where any animals that were valuable or delicate were brought in at night. It was in that situation, Mary brought forth a child and placed him in the "Manger." [phatné__Feeding trough__Strong's Concordance]  because the guest-room was full and they were relegated to staying in the area where the animals were kept at night.

[Remember the Judges 11 incident where Jephthah promised to sacrifice the first thing to meet him coming out of his house, expecting, I'm sure, it would be one of the better animals that required keeping indoors for safety. Unfortunately, it was his daughter who came out first.]

If all this is correct, it is worth noting that Jesus STARTED His journey on this earth in a house where the guest-room was full and he was born below with the animals, and ENDED His life in a guest-room on the eve of His crucifixion eating a meal with His disciples.

And now we'll take on the third myth in this study.

I'm thinking that the earlier church fathers, or whomever it is that creates church traditions, were a bit concerned with keeping the baby Jesus divine and so they had to remove some of the vestiges of His humanity to maintain that divinity. At least in their mind! They certainly had the cooperation of the song writers as some Christmas carols include the idea of Him never crying, Away In A Manger being one. The problem with this is two-fold.

First, it is clearly stated in a couple of places in scripture that Jesus DID CRY. One is in John 11:35 where the shortest verse in the bible is recorded and it simply says, "Jesus wept." There may be disagreement as to WHY He wept, at the loss of Lazarus, His friend, or at the unbelief of the two remaining sisters. or both, but He did, in fact, shed some tears.

Second, it also states in Luke 19:41 that Jesus "wept over" the city of Jerusalem and her inhabitants for refusing to accept Him for Who He really was and is even now.

But Hebrews 5:7-8 also refers to Him offering up prayers and supplications with strong crying and tears and that it was through suffering He learned obedience.

I think it unwise to think Jesus incapable of shedding tears, even as an infant. His conception was miraculous, to be sure, but the rest of the gestation period inside His mother and His moment of birth proved to be quite human, with blood, sweat, and a few tears to boot, I would imagine. He was, after all, fully GOD and fully MAN. We don't have to lose one to preserve the other in this miraculous person born that night in Bethlehem.

Myths 4-7 will come in part Two of this study.

Before I go however, remember this. No one is saying, especially understand that I'm not, that it is wrong to celebrate with nativity scenes or that you might should throw them away, as one jokingly said on Sunday morning. My answer to them was, and still is, that mine are too expensive to do that.  :)

To sing Christmas carols as they are written or to enjoy the things we normally do at Christmas time are not wrong. Quite the contrary. Most of these things I'm addressing are not completely clear in the scriptures themselves, so all I'm doing is presenting some things from the text that might help us get a truer picture of the events as they unfolded.

So, I would think it's OK to celebrate His birthday any way you want. Just remember two things.

One is that the early Church did not seem to make much of His birth, in terms of celebration, but they sure did celebrate His death, burial and resurrection. But the Christ event really is all about the fact that He came, did what He did, as Who He was and is, all on our behalf. Who wouldn't want to celebrate HIM FOR ALL OF THAT!

MERRY CHRISTMAS in this year of our Lord, 2013.

Great stuff Paul! I may send this out to my choir if you are okay with that!? Blessings to you from Houston!

In one place where we were in Oz, such words would be regarded as blasphemy. Incarnation is one thing, but, "let's be real. He is God!"

I know from experience!

We trust you and yours will have a most enjoyable and blessed Christmas.

Thanks for commenting as usual.

To all who will read this I want to wish you a Merry Christmas and may this season remind us all of God's greatest gift to us in the giving of His Only Begotten Son.

Paul, I loved this post! Your myth #3 reminded me of the time I was a young girl in a parochial school. We were forbidden to sing "Away in a Manger" since it was written by Marin Luther. But I sang it while walking home from school during the Christmas season...all the while looking around to make sure the Christmas-Carol "police" didn't hear me. ...smile...

Thanks for this post and Merry Christmas to you and yours!

We had our "Baptist police" about some things as well. But it usually had more to do with dancing and listening to rock and roll or country music more than Christmas carols. At least your "Catholic police" kept it in the arena of Church related issues and people. LOL