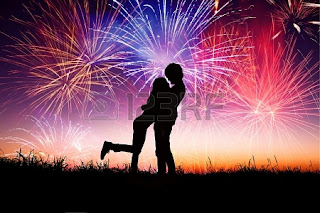 We associate fireworks with falling in love. Zow, bam, wow, boom, and we're in love. Well, falling in love doesn't work that way generally speaking, but sometimes that kind of fireworks display does come about AFTER the wedding as the couple begins to develop their roles in family life. Let the fireworks begin.

The phrase "Roles In Marriage" refers to what is expected by a society, religion, or even of a couple, in the performance of certain responsibilities assigned to the husband and wife in marriage. Who does what? What is expected of each? Some people believe the bible gives explicit roles for each and those do not vary. Other people believe that culture sets what is expected and those roles sometimes change. What we wind up with is the culture condemning religion for being too rigid and religious people condemning culture for being shamefully flexible. Who's right in all this?

I would suggest two things for us to remember when talking about roles in marriage relationships.

One is, in scripture there is clear indication that the husband and wife are to be seen as equal with each other. This means that in thinking about a couple biblically, neither is to be seen as inferior to, nor superior to, the other. That boat simply doesn't float scripturally. Add to that the fact that the word "roles" doesn't appear in scripture in connection to marriage either and you have a reason for wondering what's going on with all this. [Don't make too much of this, however. The word Trinity doesn't either.]

The second thing to remember is, simple gender biology shows there are gender differences with differing responsibilities. So obviously, the man does not give birth to children nor does he breast feed the child. That's a woman's role clearly. But the rearing of that child, the changing of diapers, feeding the baby a bottle at 2:00 am, potty training, and a host of ultimate things done for and with that child are up for grabs biblically.

Apart from the obvious gender differences in child-bearing, there is nothing else said about any lists of "oughts" or "shoulds" about who does what with regards to family life. Both husband and wife provide for, care for, and generally give themselves to being numerous things to the family unit out of necessity and circumstances, but assigned lists are not found.

With these two things in mind, I want to give my fairly simple personal conclusion about this whole thing of roles which comes from my own, and I trust correctly interpreted, biblically understanding.

Because of Agape love, changing circumstances, and a lack of biblical listing of various responsibilities, I think it would be completely silly, and maybe even injurious spiritually and emotionally, to develop a list of what the man is to do and the woman is to do based on gender, [child-birth excepted] since the scriptures don't, and would rob a couple of being able to use their unique gifts, talents, and even intellect perhaps, were this to be done.


Husbands and wives are to function in what has been called by someone I read, "a parallel mutual relationship" which would be characterized by unity, equality, love, grace and, as equals in surrender to the Lordship of Christ and self-giving service to each other, several things would then develop in the relationship.

Both become leaders. Both become followers. Both are submissive. Both are dominant. [In some fashion.]  They wind up in a respectful, fulfilling, "one-flesh" union that demonstrates what love is all about and they wind up being "subject one to another out of reverence for Christ."

Now that kind of marriage creates it own fireworks,

As I said, let the fireworks begin.

But it's in celebration instead of confrontation.

May I be the first to shout a hearty "Amen" to your beautiful post about the marriage relationship!

In assigning "roles," sometimes we assume all women will be mothers and all men will be fathers but we know that's not true. Some choose not to have children and some are not able.

Regarding giving birth and breast feeding.... both are natural, but relatively short-term functions. And Jesus didn't seem to elevate these two things to the level we do today in the church. He placed more importance on the Word of God. (Luke 11:28)

That's not to say that giving birth isn't quite an accomplishment... smile...but the label of mother and father, husband and wife, male and female both reflect a variety of accomplishments with not one being more important than the others.

A search for the term "one another" in the NT results in somewhere around 40-50 times if I remember correctly. That says "mutual" to me!

"They wind up in a respectful, fulfilling, "one-flesh" union that demonstrates what love is all about and they wind up being "subject one to another out of reverence for Christ."

Now that kind of marriage creates it own fireworks,

As I said, let the fireworks begin."

Among the creaky joints, aches and pains, the sparkle is still as bright as ever, as is the will.

Waking up to the damage done to marriages, by the demands of traditional roles,rules and expectations was the realization that very little of what our traditions taught had any Scriptural foundation.

By the way, I didn't say we ticked all the boxes!

Great article. Being your partner that hopefully is helping create the fireworks, I wholeheartedly agree. It took us awhile to figure this out and oftentimes in contradiction to what we were taught and expected to teach. Pretty interesting how mixed up it gets when we listen and accept other interpretations of scripture instead of our own. Love our fireworks, mister! Gets "gooder and gooder"!