JUST HOW MAD IS GOD? 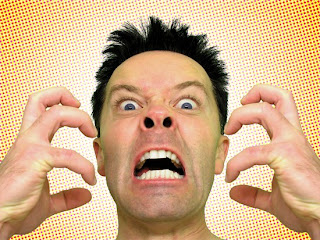 One day I discovered that God's anger or wrath against us is different from human anger and I needed to know that. I had early on in my life discovered human wrath/anger to be an awful thing and totally unholy, unloving and mean. I had observed it when a man's anger got the better of him and he allowed his fury to burst all restraints; That's a terrible thing to behold, especially if it's from a parent or someone you trust.

Unfortunately, many fundamentalists seem  to love to picture God's wrath that way and warn us to act right or we WILL make God mad. And if we do, our name will be mud. "Be good or God'll gitcha," is their mantra.

In presenting God's wrath like that, they make Him appear as some teachers I used to have in school who were so angry, it seemed to me at least, that to miss one jot or tittle of their instructions and to do some assignment wrong brought down their wrath.

I saw that result in a couple of different kinds of responses among those who were in the class. One response was some of the students memorized and regurgitated the material with fear hanging over their heads, but often they neither understood nor remembered what was supposed to be learned. They were too afraid to even think clearly. The other response was by those who rebelled and were punished virtually every day for it and became an example to all the others who wished they had had guts enough to rebel too, but didn't. I'll leave it to your imagination which response group I belonged to.

If God is like that, do I need or want Him? No thanks! I could never trust His love against that kind of backdrop.

The view of an angry God as described above often finds greater support among people than does one of a compassionate and loving God. People would rather believe that about God than not. Why? It may be because we tend to model our image of God after our own image. And we do find people often being angry and marrying it to the twin beasts of power and control. This is easily seen in those who are so quick to say that the tragedies in nature, such as hurricanes and floods, are obviously, according to them, God's wrath being poured out on a nation that allows certain iniquities to transpire. They frequently say that with a bit of glee, I might add.

They would rather do that than associate those storms with natural weather patterns that frequent certain areas of the nation. We might need to question closely whose wrath it really is being spoken about when we hear things like that. It could be that the rule of thumb that says, "You know you've made God in your own image when God winds up hating the same people and things you hate," says it quite clearly.

This is not to say the biblical materials don't show God USING such things in judgment because they do say that, and He did. But it IS to say those who talk that way about those things completely and conveniently forget the explanation of Jesus gave about tragedies when He said they [the tragedies] DID NOT automatically mean someone's sins were greater than someone else's and God was NOT punishing those who experienced them. [Luke 13:1-4]

Well, then, what IS the wrath of God? Is it an attribute of God?

It would help to understand that wrath or anger, when speaking of God, is not fundamental to God in the same way that LOVE or HOLINESS or even JUSTICE are fundamental to Him. You would not say that "God is wrath," but you would correctly say that "God is love" or "God is holy" or even "God is Just." Love,holiness and justice are three fundamental and eternal attributes of the character or nature of God. But His WRATH is different. It is the DIVINE outworking of His character or nature in response to sin or evil. Luther made this distinction with his idea of God's wrath as His OPUS ALIENATION [alien work] and His grace as His OPUS PROPRIUM. [proper work] It could be said this way....

Wrath is what happens when holiness meets sin!

Wrath is what happens when justice meets rebellion!

Wrath is what happens when a righteous and loving God meets pure evil!

But, by the same token, we do not say that God is subject to fits and temper tantrums either. His wrath against sin is something more than just a bad mood.To understand all this you would need to remember before creation God, in His Trinitarian personhood, was Love and Holy and Just because that's who God is. At that point, God's wrath had not been displayed because it took the coming of sin and evil in men and angels for God's holiness and justice to bring wrath against such.

Someone might try to argue that before creation God's MERCY had no occasion to be exercised either, so that would make WRATH and MERCY the same. Though that might sound logical, the Old Testament repeatedly affirms God's reluctance to exercise his WRATH and his delight in showing MERCY. So they're not the same at all. But God would not be God except He hate and shows wrath against evil as He shows mercy to sinners.

And, since it is made clear in scripture that it is the goodness of God that brings repentance, for me to hear that God is loving and merciful as well, and has chosen to save people who respond in repentance and faith, I was able to be all ears when I heard the true message of the gospel.

[Now I'm aware the gracious work of the Spirit was required even for that understanding.] In that gospel I heard that we see a full display of DIVINE WRATH, in perfect balance with the gracious and full display of DIVINE LOVE, in what we today call Calvary. It is also called a deliverance or salvation for all who believe. It's also interesting that when God HIMSELF DEFINES salvation, He calls it a deliverance..."by God"..."from God"..and His wrath...through God and His gift... of Christ. [Romans 5:9-10] WOW!!Then, finally, John 3:36 simply says, “Whoever believes in the Son [the gospel] has eternal life, but whoever rejects the Son will not see life, for God’s WRATH remains on him." This now makes sense to me.Perfect anger or wrath, because of perfect holiness and justice and love, is sure different from any I had known. So, for that wrath/anger to be upon those who REFUSE the gospel is now understood, by me at least, as the holy and just and even loving thing to happen.

To say "God is mad" doesn't even begin to tell the truth. Saying God is loving, holy and just, with His mercy, grace and wrath being shown to all men as a result, really does say it all. That's the definition of the Cross. Makes His "anger" a different kind of thing doesn't it!

How I would love for preachers and congregations to know the God of the Bible, as you clearly reveal, that you do.

I understand, very well, what you relate about where your journey began.

May the Lord allow you the freedom to continue in the way you have been writing! Such is much needed!

You're very kind. Thank you.

I agree about the parable of the prodigal son. For YEARS I've referred to it as "The Parable Of the Loving Father."

I've pointed out that, while the woman swept until she found the coin and the shepherd left the 99 and went after the one, the father allowed the boy to come to the end of himself but was waiting when he did have a change of mind [repentance] because he HAD LOVED HIM the whole time.