HAVING FUN WITH AN APT APPLICATION OF AN ILLUSTRATION

I've looked and looked for a metaphor, illustration, or picture that would help explain a point I would like to make about Christians being in so many different denominations. I believe true believers can be found in many denominations and my love and my acceptance are to cover them as members of the Body of Christ.

Here's how I would illustrate it. Remember, as with all parables/metaphors/illustrations, you can't press every point. If you do try that, you will miss the heart of what is being said. [Think.."If you have faith as a grain of mustard seed, you can say to this mountain, be removed..."] 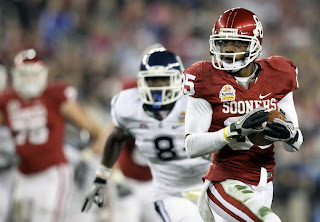 OU football is a passion with me. [Don't tune me out yet, please.]  My wife is as bad as I am about it. Maybe worse!  She and her sister, Jenny, once took oranges into an OU/Nebraska football game, the winner of which went to the Orange Bowl, and tossed oranges onto the field after OU's win. Some of our kids sent her a pretend note on the DA's stationary charging her with a misdemeanor and announcing a fine for the violation. They had a ton of fun at their mother's expense.

[I was out of town and would NEVER do that kind of thing anyway.  ;)]

But we like OSU too. The Cowboys [that's the Oklahoma State Cowboys] are our second favorite team. We're pulling for them against every foe they play.... except one.

The Tulsa Hurricanes are our third favorite team. We lived in Tulsa for ten years and love the "Canes" except when they are playing you know who. How can we like all three? They are all from our favorite State called Oklahoma.

Recently I heard an exchange on sports radio that made me half mad. One caller, an OU fan, was taking to task another caller who was also an OU fan. What about? The latter OU fan had said he likes OSU also. The former OU fan was irate that a true OU fan would dare say he had any feeling but hatred for OSU. You see where I'm going with this don't you.

Let's say Christians__that's anyone who names the name of Jesus as Lord__are like a State. Within that State, you have different groups. [OU/OSU/TULSA fans] They all like football and the common ground for those groups is Oklahoma. They've just chosen to align with different groups within the State for whatever reason. That's OK. In Oklahoma you're free to be a bit different. It's even OK to believe your group is closest to what governs true greatness in football. [OU is certainly that.]

Somehow though, it is possible to respect ALL those involved in football, whether OU, OSU, or Tulsa. And, certainly, there is no need to be angry with one who is a fan of one group but doesn't hate the fans of the other group. I don't think you should penalize a person because they are appreciative of another group's fans. After all, it is Oklahoma we're talking about here. Let's respect all fans, choose which group best matches our particular understanding of football, and not be angry at those among our group who have a love and appreciation for all fans, in Oklahoma.

Further, let's suppose, as has happened on occasion, something untoward [that's an old word that means "bad" for all you new translation buffs] transpires on the OU team. If the people in charge hide the wrongdoing, the trust factor of many OU fans would be damaged when it becomes known. [Not to mention that it is ethically wrong to hide reality anyway.] But, if honestly faced, spoken of, dealt with, and corrected, not only is trust restored, but the ultimate goal of good football will go on unhindered in Oklahoma. Having problems is no problem. Not facing problems honestly and openly is a major problem.

Some rabid fans might see dealing with the problems as disloyalty or hurtful to the team and even the State. I don't. I see it as honesty, courage, and a true commitment to what makes football a truly great sport. And, I respect the ones who had courage enough to speak to the problem when they knew many rabid fans would not understand and there could be a heavy price to pay.

Well, I don't know whether anyone understands what I'm saying or not. But it sure helps to say it. As with all parables/metaphors, as I said at the beginning, don't press every point and miss the message. If you're not a football fan__forget it.

I like the analogy, but I'm not smiling, because football (of several codes) IS a religion in this country.

It's a religion for which devotees are expected to forsake all other responsibilities,including work and family, and has been the cause of much relational chaos, and heartache.

After a game, a worship service is held in which the very worst of human behavior is exhibited,extreme drunkenness,lewdness, etc., and governments love it, and pour money into it, because it diverts attention from the real issues of life.

Maybe that's an Australian phenomenon. I hope so, because I am completely ignorant of your football codes.

I did play rugby league, when it was a game of skill and tactics, and the ball was the center of attention, not the best player in the opposition, and the fans didn't bay for blood and injury!

No need to apologize for speaking the truth abut a situation like that. I've heard of similar things in other countries also.

I will say that the football atmosphere here [Excluding the professional brand] is a bit different with it being College. It's more of a family thing.

Entire families, including Mary and myself, go out three or four hours early and enjoy an atmosphere that is carnival in nature. It's actually quite fun and enjoyable.

Fortunately, for us at least, alcohol is not sold in the stadium and is not allowed to be brought in either.

But....the ability to create a god of anything does exist here. Some do take it too far and they become as obnoxious to me as church legalists who make a god of religious activity and miss what real Life in Christ is all about.

I am grateful that I don't get around either kind much in my older years. I know you're with me in that.

While I'm a hockey fan (a convert from football:), I did appreciate the analogy! Thanks!

I'm a little embarrassed as a sports fan to have to say this, but, I've NEVER seen a hockey game in person, I'm not saying that boastfully, just honestly.

OK, lets say the analogy is religion as football. OU would be baptist, ND as catholic, USC scientologist, Florida might be Jews, Penn State demonologist, OSU CofChrist etc. Or, maybe by conference where SEC is black baptist, Big10 Methodist, Pac10 New Age, Big 12 white baptist, Ivy transcendentalist, ACC Presbyterian, etc. OK what have we learned. There is diversity but they are all united in the desire to win. Win the BCS Championship or enter the pearly gates. OK thats clear; so does that make this a better place to live? Indeed it does. I don't know how but winning is my religion!

I read through the list and what I saw was a bunch of losers, including the baptist group.

But I heard there is One who did win BIG TIME. Who knows, maybe if we'd be open to that winner, the game would take on a new flavor altogether.

[But we might be on the verge of pressing the analogy a bit far, right!!] LOL

OK, preacher Paul, we know about your big winner who walked the earth and offered to save us creatures who slash and burn and melt the ice caps. As in football with concussions, broken bones and short lives all is not well. Is the candle worth the game? Indeed it is. Its not the winning, the pearly gates, its the privilege to play, to live. Laugh a little, cry a little and don't press the analogy; have fun writing maybe!