Who would have believed it? Married at eighteen [that's me] and seventeen [that's Mary] with no money, no sense, and no experience in relationships that were really healthy at all. I was already pastoring a church as a freshmen at OBU [The Oklahoma one] while Mary was finishing her senior year of Highschool. She graduated on Tuesday night and we were married the following Thursday night, May 28th, 1959.

Three babies were born in four years. The first was a daughter we named Cherri. The second was a son we named Wade. The third was a daughter we named Melody who was born ON our fourth wedding anniversary. After the doctor explained to us what was causing it all, the next son, and last child, a boy we named Brett, wasn't born until eight years later. Mary and I are quick learners.

But this isn't about the kids. It's about the one who is the mother of those kids and a wife to their father. It is now fifty years later. As I said, who would have believed that as one song says...

It's not been easy. It has certainly been harder for Mary than for me because of the damaged goods she got in me as a husband. I won't get into it except to say I was something of a weird duck. Fearful, controlling, and demanding, [I fit right into the fundamentalism I had embraced religiously] she had her times of trials ahead of her fifty years ago. [I still struggle somewhat. Tell me I ought to do something or I should do something and I bristle.]

That's not to say Mary didn't have her own struggles for maturity. She is the first to admit that. But hers were of an easier category to live with than were mine, it seems to me. I often hear people say they never quarreled or fought. I don't believe them. But if that were true, one of them was unnecessary and their life was boring at its very best. But what else would I say!!

What was it that got us through? I know it was the Grace of God. But I'm asking what did that Grace look like? If I were to try to boil it down, for me, it could be explained in one word..."generosity." I read a paper once that explained "generosity" in a new way for me and it has forever changed my understanding. Especially as it relates to marriage.

Next time I will explain that word which describes, from my perspective, how we've been able to last in a marriage for fifty years. But right now I only want to say to Mary a big "thank you" for those years. The chorus of a song written and sung by Alan Jackson says it best for me Mary...... 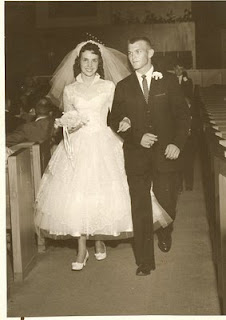 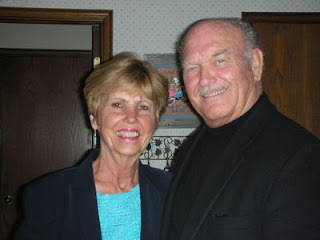 My heartfelt and heartiest congratulations to you and to Mary.

Having crossed the 50th ... and Peg and I finished, 20 minutes ago, viewing the DVD and Picture Album our grandson made of it, for us ... I know whereof you're speaking. If I'd been smart enough, I'd have said the same things about me, and about us.

It does keep getting better and better, doesn't it?

Bob,
I am so sorry but I was trying to post a picture of Mary and me and inadvertently lost your comment. I went to my E-mail and copied and pasted it to the comment section but it shows my blogger name and picture too.

I'm too frustrated and tired to try again to correct it so please accept my apologies and thanks for your gracious words.

Wisdom I learned from you both:

1. cereal is seminary food.
2. never cross the mother of a blog administrator.

Oh that's funny. You got it right on both accounts. Truth is truth.

Wow, what a feat and what a testament to the persistant grace of God.

Congratulations to you both!

You look as good now as you did then! Love you both and am grateful that you are my parents!!!!!

Hey, Handsome,
We both know that usually we each marry a person at about our same emotional level. What this means is that if you had baggage, my luggage rack was just as full way back in our teen years when we married.

What I'm grateful for is that we both decided to go forward and to grow. If one of us had opted out of that process, we would have had to split up long ago or go into that cold-war state of marriage that way too many people our age seem to be. I've seen many women who've chosen to keep learning and growing married to men who choose not to. What misery! So that's one huge thing I'm grateful for in you. We're both still learning and growing and open. Thanks!!!

And since you're quoting C&W songs, one of my favorites includes the following lyrics:
Loving you makes me strong,
Makes me want to live forever,
Gives me the strength to carry on,
Through the rain and wind and weather...

You know what, Handsome? These songs written on this venue don't quite hold the same meaning and impact as they do when we're listening to them going down the road on the motorcycle, singing at the top of our lungs, with me keeping time to the music by drumming you on the back. Just not quite the same...
Love you, MB

That is the correct testimony to it all. Thanks for commenting so often and wisely.

Celebrating your birthday has always been a mixed bag for you with you having to share it with our anniversary.

But celebrating your life has always been the easiest thing in the world for mom and me because of who you are. Your name says it all from our perspective.

Hey beautiful, your comment made me laugh out loud. Those are only a few of our memories that make our capacity for memories a treasure chest. And you're right, it's a whole lot more fun to hear and sing those songs than it is to read them.

For the rest of you, those particular songs are a few of the list that Mary and I have collected over the years as each anniversary we would choose one that spoke to our feelings about our love and marriage and made it what we called our "anniversary song." I have put several of them on a CD and she and I each have a copy we keep in our respective automobiles for listening purposes.

Kinda corny but what the heck, it's ours.

Love the song idea!!!! I too was married at 17 (the first time) and Mary is right, both must work on their luggage rack or else it fails, as did mine.... God bless you both and have a wonderful coming 50 years! Many blessings...

It is my pleasure to join in the celebration of your fifty years together. Life, and marriage, can be complicated, messy, and difficult. It definitely takes generosity and grace for a marriage to survive all the troubles of this life. But I would also never want to suggest that marriage is anything less than joy, peace, comfort, fun, an adventure....so many marvelous and wonderful experiences as well.

We all start with one understanding of love and end up with another one....much deeper, much broader, much more satisfying. May you continue to grow in that love for one another.

Mary and I join you in rejoicing that God is in the salvage business. We're living proof. Thanks for stopping by. Do it often.

This statement of yours..."We all start with one understanding of love and end up with another one....much deeper, much broader, much more satisfying"...is one of the more profound lessons we've learned.

You gotta sick around working through a lotta yuck to get there don't you, and as Mary and Kate reminded us, it takes both. Good words.

Congrats! What a great example you have been to so many!

A HUGE congratulations on your 50th. Love both you guys.

Thanks and I continue to enjoy your blog and facebook comments. Tell the family hello for me.

Thank you and what I said to Kevin about his blog can be repeated to you. You're doing a great job of dealing with issues. Keep it up.

Big Congrats on the 50th! That is something gold, right? I recommend some gold bars in this economy. :o)

You look like Wade in your wedding pic. Or, I should say Wade looks like the younger you.

Been away for four days so just caught up.

Congatulations! Solomon was so right!

Yesterday I preached at Village Baptist church in Oklahoma City as their key-note speaker on Senior Adult appreciation day.

I was that churches first Youth Pasor 49 years ago. Now promoted to their Senior Adult day guest speaker. I told them I only have one more promotion to go. :)

Thank you for sharing your life and trials and blessings with so many of us.

I'm late catching up, but congratulations to you both!