THE BOOK IS OUT

FROM ONE WHO WOULDN'T PLAY THE GAME 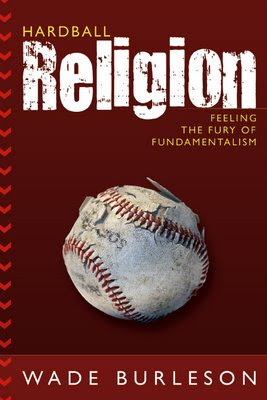 You see above the cover of Wade's new book just released. I'm showing it here and linking to the place from which it can be ordered. I'm sure it will be in the bookstores shortly, but it can be purchased On-line at this publisher's site now. That link is......http://www.helwys.com/books/hardball_religion.html

I was asked to review the book with a pre-published printing of that review on my blog but I declined for obvious reasons. However, if you would like to read a thorough, thoughtful and insightful review that is well written by a layman who is no stranger to the SBC conlicts go to....http://mightyfowl.blogspot.com/

My personal and some what [I admit] biased opinion is you will love the book which is a great read [I read the original manuscript] and I predict as well that it will eventually be on most Southern Baptist's bookshelves after they have devoured it. No bias in that last statement at all. Just a humble but accurate prediction. :)

I'm convinced the reading audience may even be much larger than simply Southern Baptist people because of the interest Evangelicals have in general as they have observed some of the struggles and even the potential disintegration of a major denomination. [Some may think that the last part of that an over statement but I've lived long enough to experience the truth that the"little foxes spoil the vines" principle is often found to be a reality in life as the scriptures have pointed out it can be.]

I'm hoping some straight talk about the issues will provide an atmosphere where change can come about without losing a great missions tool in Christendom. I don't know that we've been the greatest tool God has ever had as Southern Baptists but we HAVE been an effective one in the past. May that be regained.

When you get the book, you will see a dedication to "Our Missionaries."

In the acknowledgments, I thank you and Mom specifically. The book could not have been written without your expert help and critiques!

You're to be commended for a well written book that reveals some things that must be heard and ultimately changed in our Convention.

I know these past four years have been most unusual for you personally, as the book will show, but you have come through them with an amazing lack of bitterness. I'm sure it's because of those close to you [family, friends and church] being with you the whole journey as your's have been, to which I can attest, but I also know it's because of your strong conviction in the absolute sovereignty and sufficiency of God and your love for Baptist people.

Your faithfulness in "speaking the truth in love" has made us proud and thankful for you.