Mary and I will be celebrating 49 years of marriage the 28th of this month. I was eighteen and had just finished my first year at Oklahoma Baptist University and she was seventeen and had just graduated from Edmond Highschool. [Now Edmond Memorial] In fact, she graduated on a Tuesday night and we married two nights later on Thursday evening at First Baptist Church, Edmond Oklahoma.

I was already pastoring, having been called to my first church as pastor a year before when I was seventeen. We had three children in the first four years and__ after the doctor explained to us what was causing it__ the fourth wasn't born until nine years later. We had a lot to learn in more ways than one.

I've been writing about women in life and ministry and decided to show the one who is much of my inspiration for both in my own walk. She is the one who defines real christianity for me in a present day human picture. She is real, brutally honest about herself to herself and others and her own person through and through. She knows the reality of Christ as He is and reflects Him in ways she doesn't even see. She loves but is not blind, helps but knows boundaries, gives but doesn't enable and is, as I said, my personal inspiration for much of life itself. I live better because I know and love her.

I'm writing this now for a couple of reasons. One is I want to. Another is I'm not ready with my next post. But the real reason is I want you to know the one who is the example for everything good I ever say about women in life and ministry. 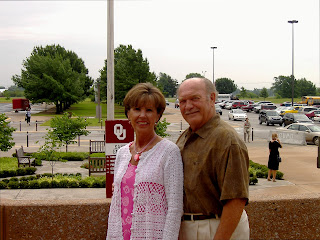 I thought it might be good to show you the way our 13 grandkids see us.

Let me say Congratulations. No, make that CONGRATULATIONS!

Nothin' like it, is there? Somewhat of a hint at an eternal marriage of the Lamb and His bride, methinks.

Congratulations to both of you! 48years is a wonderful milestone.

I understand your thoughts about Mary. When I think of how much my wife has contributed to my understanding of who God is just by the way she has lived her life, she has done more than many pastors in the pulpit.

More importantly, she has put up with a good deal from me that demonstrates her patience and perseverence over the years that I did not deserve but she graciously gave to me.

We do well to be extremely thankful to Father for the wives we have the privilege of partnering with in life.

Joy and happiness on this Mother's Day celebration and the celebration of your upcoming anniversary.

You probably know what I mean by "who would have believed?" It is a sure work of grace for us to still be together. We were so different. We were so young. But, hey, it made for a great trip and it's stil continuing. Grace is the only word for it.

Thanks. It is a real accomplishment more on her part with patience as you've said your wife has had also. Aren't we glad!

Congratulations to yourself and your wife!! Isn't God good to have given each of you your special partner for life? And he gives us grace to stick it out during the hard times.

I just can't figure out how you can be married so many years and have such a young looking wife!

Thank you. I could tell you that living with me is just so easy there is no wear and tear on a person...but...Mary might read that kind of statement and she would tell you the truth. :)

Hug that sweet wife of yours' and those kids for me.

Hey, Handsome,
I can hardly believe it either! Where did the time go? Our 4 kids, 13 grandkids, and 1 great grandchild are evidences that time, and a lot of it, really has passed. It's not just our imagination.

Thanks for the kind words. Not quite true, but, hey, I'll take whatever I can get. We both know the truth. It took a lot of hard work, gutting out the really hard times, fighting and arguing and learning and growing. And it was quite equal on the give and take from both of us.

I'm looking forward to celebrating our 50th next year, and excited about getting to live each day with you. These latter years are truly the reward of both of us hanging in there in the good and the bad. Not easy, but worth it.

You the man!
MB

What can I say! Bring on many more to a hundred and four.

[The rest of you will just have to put up with our way of communicating if you've read this far.] :)

I love the second pic. I can easily understand why they see you that way... :)

I sure enjoyed preaching to your folks while you were on your mission trip. They're great people.

What a work of God's grace in two of His own! To Him be all the glory and praise!

You've stolen my thunder in this house; my wife and I have only reached the 47th mark.

I see marriage has inflicted you and I with the same disease, the shiny higher extremity!

I'll bet you're like I am and believe ALL the bible. Even that little known and seldom remembered beatitude that says..."oh the blessedness of baldheadedness." In fact, I'll bet most people are so far gone theologically they can't remember reading that one. Shows the depth of apostacy on the part of some.. right? Not you and me...we're true believers. :)

With wisdom and theological knowledge like that you would fit well amongst the royalty of the SBC. :):)

THAT is funny. I do believe it is my all time favorite comment. Way to go. :)

Having only met you once and following your Fruit of the Spirit evidenced life and the grace you examplify on your blog and Wade's I can only conclude your wife must be a wonderful woman! Congratulations to you both and many happy more years...hey i look like you on the top and only been married 17 years...what's with that, huh? Hey we never got to eat together...i am in between assignments and would like to move to Oklahoma if God opens something up and it is His will...so say a good Okie prayer for me!
Ron

Good to hear from you and if you ever get to Oklahoma, for any reason, call me. Supper is on me.

Congratulations to you and Mary for your faithful example of commitment. KaJean and I will be married 40 years in August. It's been a pleasure to have know you and Mary for nearly 30 years and we praise God for your impact on our lives. When you settle the commitment question early, then you know you are going to make it the rest of the way together, His way. By the way Paul, you and I most definitely married up in our lives. God bless you both and I can't wait to see what God is going to do next with you two. Love you both.

Congratulations! May God bless you, and here's looking forward to 50.

It's hard to believe it was thirty years ago God was working in all of us at Southcliff. Those were great days. [As are these]

By the way Steve, I'm preaching at Southliff this next Sunday morning. It's always good to be back there.

The Lord willing..when the fiftieth anniverary gets here we're going to celebrate with a dance. There will be plenty of countries and fifties songs in a rented hall somewhere and Mary and I are going to ride our motorcycle to it.

Of course we're going to invite people to share it with the warning of what we're doing so no one's sensibilities or personal convictions about things will be offended. If you're close we'll sure invite you. :)

There is no way that woman in the picture has been married for 49 years!

Congrats to both of you.

And...this picture is less than a year old. [But..you know..no one ever says that about the guy in that picture..what's with THAT. :)]

On the 28th of this month we will celebrate our 14th anniversary. We are just 35 years behind you! Congratulations, Paul!

I'll look forward to congratulating you then Bryan. Of course I'll be one hundred and three years old, but I'll fly in from preaching somewhere and type you a first rate comment. :)

[Can you believe that? It's called perspective on how long I HAVE been married. Scary.]